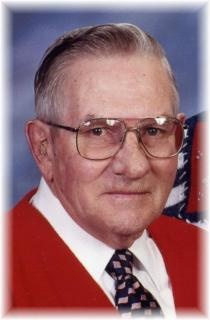 Funeral Services: Will be held on Friday, June 28, 2013, at 10:30 a.m. at the Fontanelle United Methodist Church with burial in the Fontanelle Cemetery. Full Military Graveside rites will be held by the Fontanelle American Legion Carlson Post No. 247. Pastors Jerry and Karen Hoff will officiate the service. A luncheon will be held at the church following the committal services at the cemetery.

Memorials: To the Max Jacobson memorial fund to be established by the family at a later date.

Max William Jacobson, the son of Fred James and Verva Mae (Tharp) Jacobson was born July 9, 1930, in Prussia Township, Adair County, Iowa. He passed away on June 24, 2013 at the Adair County Memorial Hospital, at the age of 82.

Max was Baptized at the Highland United Methodist church on April 8, 1934 and was a member of the Highland UMC Church until transferring to the Fontanelle UMC in December of 1981.

Max attended country school at Prussia No. 4 and No. 5 through eighth grade. He graduated from Fontanelle High School in 1948. Before entering the military Max worked construction, helped neighbors with farming and worked for Swift Packing Co. in Omaha, NE.

In February of 1952 Max entered into military service and served 16 months in Korea. After fulfilling his military obligations Max returned home in February 1954 and again took up farming seven miles north of Fontanelle, renting land from Ed and Stella Zimmerline.

On September 26th, 1954 Max was united in marriage to Phyllis Jean Campen at the Church of Christ in Bridgewater Iowa. To this union five children were born: Stanley, Sherri, Mark, Roger, and Randall.

Max and Phyllis enjoyed many trips and parades with the Carlson Post #247 Drill Team, competing in several competitions and also helping at many military funerals and the Memorial Day services and many other Legion activities. Max also served on the Adair Co Veterans memorial committee.

Max and Phyllis farmed north of Fontanelle for several years before moving to the farm south of Fontanelle where they farmed until their retirement. In 1995 Max and Phyllis moved to their home in Greenfield Iowa. They continued to garden and Max especially enjoyed planting and digging potatoes which he eagerly shared with his family. Max also worked part time at the Adair Co Sanitary Landfill after his retirement from farming

During retirement Max spent many hours working on puzzles, teasing his grandkids and great-grandkids, reading the "Our Iowa" magazine (looking for the I's) and during the last few months playing over 1900 games of Spider Solitaire. He enjoyed feeding and watching the birds, doing household fix-it jobs, eating Cherry pie and his favorite color was RED!

Max was preceded in death by his parents and his parents-in-law, Eimo and Elsie Campen. His brother Leo Jacobson, sons Stanley and Roger and grandson Corey Menefee.

To order memorial trees or send flowers to the family in memory of Max Jacobson , please visit our flower store.
Send a Sympathy Card