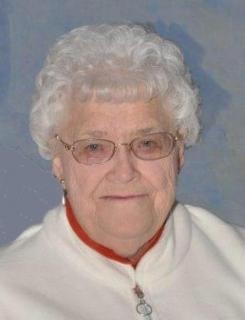 Funeral Services: Will be held on Friday, October 8, 2021, at the Emmanuel Lutheran Church in Fontanelle, Iowa, at 10:30 a.m. with burial in the Fontanelle Cemetery. Pastor Steven Broers will officiate the service. The Steen Funeral Home in Fontanelle is in charge of the professional arrangements.

Memorials: Memorials may be directed to Maxine Baudler memorial fund to be established by the family at a later date.

Maxine Lillian Wheatley Baudler died October 4, 2021 at the Good Samaritan Society Nursing Home. Maxine was born on the 1st day of September, 1928, to Otto Wheatley and Emma Kaufmann Wheatley. Maxine graduated from Bridgewater-Fontanelle High School and became a Country School teacher of young children. She entered into marriage with Bernard Fritz Baudler, son of Ernest and Lizzie Sophia Christine (Lorenz) Baudler, on January 1, 1949. They had a farm just north of Fontanelle, raising crops and milking cows. She met Bernard while on a fishing trip. She had just caught a fish and Bernard took a dare from his friends to go over and help her take the fish off the hook. From there, love blossomed.

The couple adopted three children. First, Jacqueline Marie, then Kevin Leroy and finally, Janell Maxine. Maxine worked hard at raising her family and working the farm along side Bernard. She milked cows and did farm chores alone while Bernard was stationed in Germany during the Korean War in 1952-1954. She teased Bernard a lot over the years that she did it all herself. After his return, she worked at Job Services in Greenfield, as a clerk for the Orient and Massena Sale Barn for many years and also for Queck Dairy Equipment. She took courses at SWCC for Dress Making and Bookkeeping. She and Bernard started raising Greyhounds dogs and then eventually, German Shepherd pups and even Husky’s.

Maxine enjoyed many vacations with her family, especially pulling a camper to the Black Hills, SD on many adventures. She was very involved with genealogy and learned to use a computer to keep herself organized. She was meticulous when it came to detailing Wheatley and Baudler history and has books full of information. She also enjoyed going to basketball games and following B-F High School sports.

Maxine was preceded in death by her husband Bernard of 72 years - parents – Otto and Emma Kaufmann Wheatley, sister – Mary Lou Belcher and brother – LeRoy Wheatley. She is survived by her sisters – Myrna Eckles and Mardell Zimmerman, children – Jacqueline, Kevin and Janell (Brian) Hansen, 14 grandchildren, and many “greats” for grandchildren, nieces and nephews. Maxine always said it was a blessing that they were able to adopt their children as the family is what keeps her heart full of joy.

To order memorial trees or send flowers to the family in memory of Maxine Baudler , please visit our flower store.