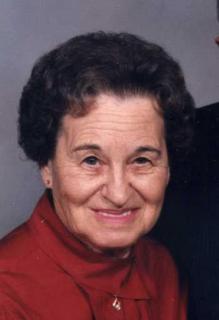 Funeral Services: Friday, March 4, 2011, at 10:00 a.m. at the First Baptist Church in Creston with burial in the Greenfield Cemetery.

Memorials: To the First Baptist Church in Creston.

Thelma May Rectenbaugh, daughter of Manley and Letha (Shirley) Farrington, was born September 21, 1919 in Eastland County, Texas. She passed away on Tuesday, March 1, 2011 at the Creston Nursing and Rehab Center in Creston at the age of 91.

May grew up in Texas where she worked in the cotton fields with her family. Texas was always home to May and everything was always bigger and better in Texas. She worked at Consolidated Aircraft Corporation with her twin sister, Fay in Fort Worth during WWII. It was during that time she met Ralph Rectenbaugh, a soldier from Iowa who was serving in the Army. On October 20, 1944 May and Ralph were united in marriage. They lived in Texas for about a year before moving to Iowa. To this union five children were born: Dana, Donna, Dee, Della, and Dennis. The family made their home on a farm in Richland Township in Adair County. Ralph and May farmed for over fifty years until retiring in 2001.

May was most happy cooking big dinners for her family. She loved to work in her garden and enjoyed canning the produce. She took great pleasure in sewing quilts for her children and grandchildren. May and Ralph enjoyed pizza parties and card parties with their neighbors. All of her children remember these as fun times. Traveling together with family and friends was also something she and Ralph looked forward to.

May and Fay had lots of fun being twins and had a very special bond only twins would understand. They were known for laughing until they were in tears!

May was a woman of deep faith. As a family they attended the First Baptist Church in Creston where they enjoyed good fellowship with their church friends. She was an excellent Christian influence to her children and grandchildren whom she cared for and loved dearly.

May was preceded in death by her parents; husband, Ralph in 2008; and sister, Ouida Farrington.

To order memorial trees or send flowers to the family in memory of May Rectenbaugh , please visit our flower store.
Send a Sympathy Card