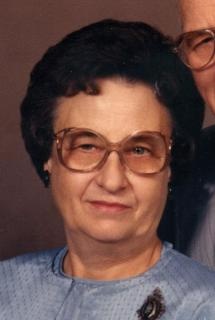 Funeral Mass: Will be held on Tuesday, November 17, 2015, at 10:30 a.m. at the St. Patrick’s Catholic Church in Massena with burial in the Victoria Township Cemetery, south of Massena. A luncheon will be held at the church following the burial.

Open Visitation: Will be held on Monday, November 16th, from 3 p.m. to 8 p.m. at the Steen Funeral Home in Massena.

Family Visitation: The family will greet friends on Monday evening from 6 to 8 p.m. at the Steen Funeral Home in Massena.

Memorials: To the Melva Casey memorial fund to be established by the family at a later date.

Melva Luerene Harris Casey, daughter of Austin Thomas and Barbara Elenor Mehlmann Harris, was born on the family farm north of Massena, on July 16, 1920. She passed away on Saturday, November 14, 2015 at the Good Samaritan Center in Fontanelle, Iowa at the age of 95. Her faith and her family were the center of her 95 years.

Melva grew up on the family farm, attended country school and graduated from the Anita High School with the class of 1937. Following high school Melva worked as an egg candler in Atlantic until her marriage to the love of her life, John (Jack) Thomas Casey on February 15, 1941. To this union 5 children were born: Barbara Marie, Patricia Ann, Rose Ellen, Mary Kathleen and John Charles.

Melva and Jack farmed together for 37 years. They raised a large garden each year, canning most of the produce to feed their growing family. Melva enjoyed her neighborhood clubs, volunteer work and the quilting circle at St. Patrick Church and a picnic any time anywhere with family. After the kids were grown she and Jack enjoyed many vacations in Minnesota with their daughter and son-in-law Ron and Mary Juhler and any other family members who could go along. After the years dedicated to raising her family she enjoyed hiking, fishing, canoeing, and sightseeing on these vacations with her children and grandchildren.

When she was 54 Melva began working the night shift at Cardinal Glass in Greenfield and retired when she was 69. She enjoyed the years at Cardinal and the many friendships made there. She always knew Jack would have a hot cup of tea and snack waiting when she got home from work.

To order memorial trees or send flowers to the family in memory of Melva Casey , please visit our flower store.
Send a Sympathy Card