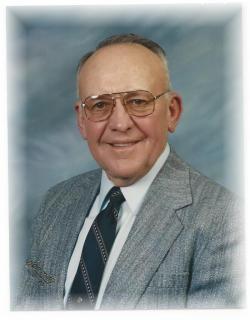 Melvin Laughery passed away on Thursday, November 14, 2013, at the Cass County Memorial Hospital in Atlantic.

Funeral Services: Will be held on Monday, November 18, 2013, at 10:30 a.m. at the Fontanelle United Methodist Church with burial in the Fontanelle Cemetery. Pastors Cathy Nutting and Jerry Hoff will officiate the service. A luncheon will be held at the church following the committal services at the cemetery.

Memorials: To the Melvin Laughery memorial fund to be established by the family at a later date.

Melvin Lloyd Laughery was born January 26, 1932, the son of Bruce Edgar and Vivian Anita (Gustin) Laughery in Guthrie County, Iowa. He passed away on Thursday, November 14, 2013, at the Cass County Memorial Hospital in Atlantic at the age of 81.

Melvin was raised on a farm near Guthrie Center and attended country school there. He graduated from Guthrie Center High School with the class of 1949. On December 9, 1951, he was united in marriage to Janice Loretta Foresman in Guthrie Center, Iowa. To this union four children were born: Connie, Doug, Judy and Kathy. They farmed in the Guthrie Center area before moving to a farm in the Avondale area in 1969 where he continued to farm. Melvin and Janice later moved into Fontanelle in their current residence.

He was preceded in death by his parents; sister, Anita Squires and her husband Loren; and two granddaughers, Kelly Laughery and Jean Benton.

To order memorial trees or send flowers to the family in memory of Melvin Laughery , please visit our flower store.
Send a Sympathy Card