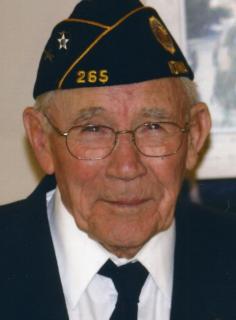 Funeral Services: Will be held on Monday, June 27, 2016, at 11:00 a.m. at the at the Greenfield United Methodist Church with burial in the Greenfield Cemetery. Full military graveside rites will be conducted by the Greenfield American Legion Head-Endres Post No. 265 and V.F.W. Post No. 5357. A luncheon will be held at the church following the committal services at the cemetery.

Family Visitation: The family will greet friends on Sunday afternoon from 2:00 p.m. to 4:00 p.m. at the Steen Funeral Home in Greenfield.

Memorials: Memorials may be made to the Merle Schaefer memorial fund to be established by the family.

Merle E. Schaefer was born May 16, 1927, in Richland Township, Adair County, Iowa, the son of Ferdinand Edwin and Sarah Ann (Stone) Schaefer. He passed away on Wednesday, June 22, 2016, at the Adair County Memorial Hospital in Greenfield, Iowa, at the age of 89.

Merle attended school in Richland and graduated from Richland High School in 1945. In December of 1945, he enlisted in the United States Army where he served for 2 years. On May 20, 1948, he was united in marriage to Ilah Sackett. To this union three daughters were born: Elaine, Janet and Mary Kay. They farmed Northeast of Greenfield on the Sackett family farm until they moved into Greenfield in 1979.

Merle later married Jean Queck and they lived in Creston until moving to Greenfield in 2009. He loved woodworking, flowers, hunting and fishing, tinkering with small engines and riding his motorcycle. After retiring from farming he was a hail adjuster for a few years and also enjoyed working for local businesses. He was a member of the American Legion, in which he took great pride helping with military funerals.

He was preceded in death by his parents, wife Ilah, and three brothers, Bernard, Leo and Earl.

To order memorial trees or send flowers to the family in memory of Merle Schaefer , please visit our flower store.
Send a Sympathy Card