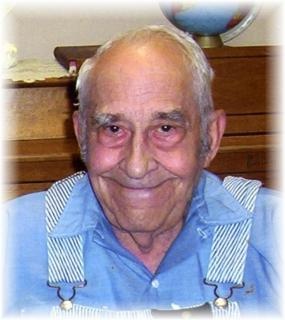 Funeral Services: Will be held on Thursday, April 25, at 2:00 p.m. at the United Methodist Church in Bridgewater with burial at the Fontanelle Cemetery. A luncheon will follow the burial at the church.

Memorials: To the Bridgewater or Fontanelle Fire Departments.

Merritt Bower, son of Leslie and Lillian (Mehlman) Bower was born on July 12, 1917, in Jackson Township, Adair County, Iowa. He passed away on Sunday, April 21, 2013 at the Good Samaritan Society in Fontanelle at the age of 95 years, 9 months and 9 days.

He attended country school at Yankee Knob through the 8th grade. He then helped his family on the farm.

On February 22, 1948, he was united in marriage to Irene Tipling in the Highland United Methodist Church north of Fontanelle. After marriage they started their life together in Jackson Township, north of Bridgewater in the home where Merritt was born and raised. They lived on the family farm for thirty three years raising their three children, Merrill Dean, Nancy Jane, and Betty Kay until retiring and moving into the new home they built in Bridgewater.

Merritt loved farming, hearing about the cows and baby calves as well as how the crops were doing. He loved to tell you stories from years back about farming with horses and thrashing as well as many other life stories as his memory never seemed to fail him until near the end.

He enjoyed having his three children, seven grandchildren, and nine great-grandchildren around to watch grow and hear about their activities. Helping some of his grandchildren with woodworking projects was a joy as woodworking and repairing and refinishing furniture became something he spent much time doing after retiring. Some memories from grandchildren were wondering what Grandpa had made me for Christmas, then growing up a woodworker myself wondering what I in turn could make Grandpa. Helping me design and build all three of my Pinewood Derby Cars. The play kitchen he made me and I played with it a lot. Spending time with Grandpa in the workshop practicing on his wood scraps pounding nails with my little hammer and sawing. The play kitchen and especially the Hope Chest he made with love for me. Getting to mess around with different things in the workshop as he worked on a project. Though always being busy, I remember him taking the time to stop and kneel down to pet and love our dogs at the farm. Seeing Grandpa busy always, makes me sure this is where I got my work ethic from. Time with Grandpa and Grandma left us all with a sense of safety and unconditional love, as well as memories to cherish always.

Lovingly making each of his children and grandchildren some handmade wood item was something Merritt was very proud of and something we will cherish.

Due to failing health it became necessary to enter the Good Samaritan Society in September of 2011.

He was preceded in death by his parents; step-mother, Grace Bower; wife Irene Bower; brother and sister-in-law, Marlan and Frances Bower; brothers-in-law, Virgil Tipling and Jerry Tipling and in-laws, Arthur and Caroline Tipling.

He is survived by his children: son, Merrill Bower of Bridgewater; two daughters, Nancy Swain and husband Steven of Atlantic and Betty David and husband Dallas of Orient; seven grandchildren; nine great-grandchildren; other relatives and friends.

To order memorial trees or send flowers to the family in memory of Merritt Bower , please visit our flower store.