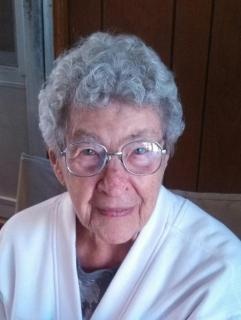 Graveside Services: Will be held on Wednesday, March 18, 2015, at 2:00 p.m. at the Massena Center Cemetery, north of Massena. Pastor Eric Schubert will officiate the service.

Memorials: Memorials may be directed to the Mildred Billingsley Memorial fund to be established by the family at a later date.

Mildred (Mid) Billingsley, oldest daughter of Fred and Elizabeth (Warrior) Stuva, was born September 14, 1914 in Adair County and passed away on Sunday, March 15, 2015 at the Good Samritan Society in Fontanelle at the age of 100.

Mid married James "Toad" Billingsley on May 13, 1932. They made their home in Massena where she was a homemaker. In the fall of 1942 they moved to Eugene, Oregon where Mid worked as a clerk in a drug store until her retirement in 1976. Over the years, Mid and Toad lived in Massena, Bridgewater and Fontanelle, Iowa as well as Eugene and Lowell, Oregon before moving to Prescott, Iowa in the fall of 1990. After 59 years of marriage, Toad passed away on September 25, 1991. Mid continued to make her home in Prescott until moving back to Fontanelle in August of 2006. In July of 2011, Mid made her home with her niece Jan and Myron Shires in Greenfield, Iowa and Weslaco, Texas. In August of 2013, Mid made her final home at the Good Samaritan Center in Fontanelle, Iowa.

Mid enjoyed crocheting and embroidery work. She enjoyed traveling and had a great passion for deer hunting and deep sea fishing. Mid enjoyed a good conversation and her door was always open to family and friends.

Mid is survived by her brother-in-law Howard Liston of California as well as many nieces, nephews, extended family and friends.

To order memorial trees or send flowers to the family in memory of Mildred Billingsley , please visit our flower store.