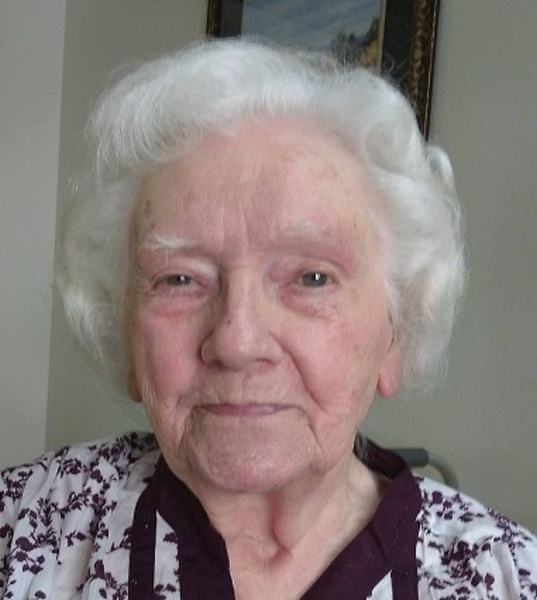 Mildred Chambers, 98, of Canby and the Fontanelle area

Mildred Chambers, 98, of Canby and the Fontanelle area

Funeral Services:  Will be held on Tuesday, March 8, 2022, at 1:00 p.m. at the Canby Friends Church, rural Casey, Iowa with burial in the Canby Cemetery.  A luncheon will be held at the church following the burial.

Family Visitation:  The family will greet friends on Monday evening from 5:00 to 7:00 p.m. at the Lamb Funeral Home in Fontanelle.

Memorials: To the Mildred Chambers memorial fund to be established by the family at a later date.

Mildred Christina Petersen Chambers was born at home near Canby, Iowa on March 20, 1923, the daughter of Christian and Mildred (Oberholtz) Petersen.  She passed away on Tuesday, March 1, 2022 at the Caring Acres Nursing and Rehab Center in Anita, Iowa, at the age of 98.

Mildred attended country school and later graduated from Greenfield High School in 1941. After graduation, she went to California with her Grandfather as a graduation gift from her Uncle Marion, but did not like it there, so she worked her way back as far as Denver to help take care of her niece and nephews.

During WWII, Mildred worked at an airfield near Denver refueling bombers as they were ferried across the nation.  Near the end of the war, the Enola Gay arrived at the airfield.  Workers at the plant were sworn to secrecy regarding its mission, but wanting to be known for their part began signing their names and writing messages on the aircraft with pencils.  Eventually, they had to be stopped because the lead was adding weight.  Mildred was very proud of the part she played in the war effort. By this time, she had saved enough to return home to the family farm in Prussia township.

After the war, Mildred met Bill Chambers on a blind date.  They were married on April 24, 1949 at the Canby Friends Church.  They first made their home in Indianola.  In the early 1950’s they took over operations at her parent’s farm north of Fontanelle.  To this union, 7 children were born, Joe Craig, Ronda Delaine, Mary Elaine, Bill Dean, Jerel Alan, Royd Eric, and Ranae Alaine.

In 1974, Mildred and Bill purchased an acreage on the north edge of Fontanelle.  She sold the acreage in 2010, moving to the Fontanelle Good Samaritan Center apartments.  Later Mildred purchased a house in Atlantic where she lived with her daughter and caregiver Ronda.  She lived there until February of 2022.

Mildred was a devoted farm wife and mother.  She helped on the farm where needed and enjoyed keeping a large garden, but most of all loved caring for her children.  In the late 1960’s, after all her children were in school, she started working at the Fontanelle Good Samaritan Center in the laundry, then as a CNA. She retired in 1978 to care for her husband, Bill, who was ill.   After his passing in 1991, Mildred traveled by Amtrack to each side of the United States to visit her children and grandchildren.  She also took bus trips and traveled with friends to Washington D.C., as well as other places.

One day, Mildred received a call from the Good Samaritan Center to see if she would return to work.  She did, and worked there until age 85.  At that time, she was the oldest working CNA in the state of Iowa.  The Good Samaritan Center wanted to honor her with a party and have her story printed in the DM Register, as well as local papers, but Mildred declined, not wanting all the attention.

Mildred was a member of the Canby Friends Church where she was actively involved for years with Sunday School, Bible School, luncheons and bazaars.

She was a wonderfully devoted mother and grandmother.  She loved having her family around, and was proud of each of her children and grandchildren.   Having a wonderful sense of humor, Mildred loved to laugh and make others laugh.

Mildred’s family thanks everyone for the prayers and many acts of kindness.

To order memorial trees or send flowers to the family in memory of Mildred Chambers, 98, of Canby and the Fontanelle area, please visit our flower store.

A Luncheon will be held at the church following the burial in the Canby Cemetery.