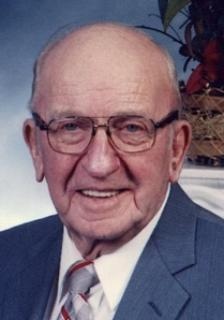 Celebration of Life Services: Will be held on Saturday, January 20, 2018, at 10:00 a.m. at the Fontanelle United Methodist Church with burial in the Fontanelle Cemetery with full military graveside rites by the Fontanelle American Legion Carlson Post No. 247. Pastor Cathy Nutting will officiate the service. A luncheon will be held at the church following the committal services at the cemetery.

Family Visitation: The family will greet friends on Friday evening at the Steen Funeral Home in Fontanelle from 5:00 p.m. to 7:00 p.m.

Memorials: Memorials may be directed to the Milo Petersen memorial fund to be established by the family at a later date.

Milo attended Kindergarten through eighth grade at Prussia #3 county school, 9th and 10th grade at Greenfield High School, and then graduating from Fontanelle High School in 1943. During his high school years, he played football and baseball and was the treasurer of his senior class.

March 7th, 1945, Milo entered into the Armed Forces where he served during WWII in the Pacific Theater. Manilla was his initial assignment, followed by Japan after the signing of the treaty. While in Manilla, he drove a weapons carrier hauling supplies to the front lines. In Japan, Milo drove a jeep escorting senior officials, such as, General McArthur. Milo also accompanied his Captain to a nearby mountain to view the devastation after Hiroshima. Milo was honorably discharged from the Army December 14, 1946. In 2009 he joined other veterans on the Honor Flight to Washington DC.

Upon returning to Fontanelle, Milo worked for Art Baudler wiring businesses, barns, and houses. Art, Kelly Marckmann, and Milo decided to purchase the Q Inn. Shortly after the purchase, Milo realized that business was not for him and purchased a cream route which he ran for four years. During this time, Milo and Donna united in marriage November 11th, 1949. In 2017 they celebrated their 68th wedding anniversary.

In 1956, Milo and Donna purchased 240-acres one-mile southeast of Fontanelle where they resided for 52 years. While farming and raising 3 children Milo served on the Fontanelle Lumber Co Board, Vice Chairman for building the new Fontanelle Methodist Church, Township Trustee, Cemetery Trustee, and was a lifetime member of VFW and Fontanelle American Legion. Milo served on the committee for the Veteran’s Memorial in Adair County and was a Charter member of Fontanelle Lions Club holding many offices, including District Governor. During his later years, Milo worked for James Meisenheimer, Larry Reis, and read meters and checked poles for Farmers Rural Electric.

Fall of 2008 Milo and Donna retired, sold their acreage to their granddaughter Andrea (Reis) and husband Bret Skellenger.

Milo enjoyed dancing with Donna, showing off his pickup “Old Red”, and talked about building the University of Canby. He was recently featured in Who’s Your Iowa Farmer for their Veteran’s Day special.

To order memorial trees or send flowers to the family in memory of Milo Petersen , please visit our flower store.