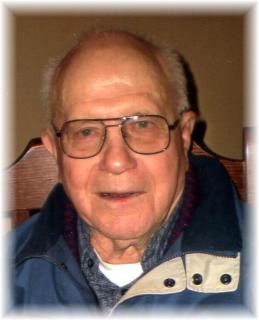 Funeral Mass: Saturday, December 17, 2011, 10:30 a.m. at the St. John’s Catholic Church in Greenfield with burial in the Greenfield Cemetery with full military graveside rites by the Greenfield American Legion Head-Endres Post No. 265 and V.F.W. Post No. 5357. Online condolences may be left to the family at www.steenfunerals.com.

Prayer Service: Friday evening at 6:00 p.m. at the Steen Funeral Home in Greenfield.

Memorials: To the St. John’s Catholic Church or the Greenfield Manor Memorial.

Morris Wayne Morgan was born on December 14, 1925, to Rosswell Elmer and Nellie Rhea (Potter) Morgan in Nevinville, Iowa. He passed away on Tuesday, December 13, 2011, at the Greenfield Manor in Greenfield, Iowa, at the age of 85.

Morris lived near Nevinville until age 8 when his family moved north of Greenfield where he attended country school thru the 8th grade and then graduated from Greenfield High School in 1943. He served his country in the U.S. Army during the Korean War. On October 30, 1953, he was united in marriage to LaDonna Repplinger in the St. Mark’s Catholic Church in Orient, Iowa. To this union four children were born: Gregory Wayne, Katheryn Anne, Nancy Rhea, and Douglas John. They farmed all their married lives north of Greenfield until entering the assisted living in Greenfield in 2010.

Morris enjoyed fishing, especially with his grandchildren, gardening, and water skiing with his family. He was a member of the St. John’s Catholic Church, Knights of Columbus, American Legion, and the National Farmer’s Organization.

He was preceded in death by his parents; and brother, Ross Morgan.

To order memorial trees or send flowers to the family in memory of Morris Morgan , please visit our flower store.