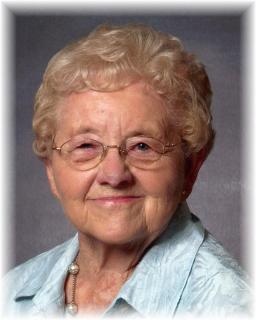 Funeral Services: Will be held on Friday, June 19, 2015, at 10:30 a.m. at the United Methodist Church in Greenfield with burial at the Greenfield Cemetery. A luncheon will be held at the church following the committal services at the cemetery. Pastor Eric Schubert will officiate the service.

Family Visitation: The family will greet friends on Thursday evening from 6:00 to 8:00 p.m. at the Steen Funeral Home in Greenfield.

Memorials: Memorials may be directed to the Myrtle Kinyon memorial fund to be established by the family at a later date.

Myrtle Caroline Kinyon was born December 23, 1920, to Russell and Irma (King) McNeley in Winterset, Iowa, the first of three children. She passed away on her 70th wedding anniversary, Monday, June 15, 2015, in Greenfield, Iowa, at the age of 94.

Myrtle grew up in Winterset and graduated from high school there in 1938. During the war years she worked at the World Herald in Omaha, Nebraska. On June 15, 1945, she was united in marriage to Keith Kinyon in the St. Paul Methodist Church in Omaha. To this union three children were born: James, Patricia and Carol. They raised their family on a farm south of Greenfield now known as the Neely-Kinyon Research Farm. They lived on this same farm for nearly 50 years. Upon leaving the farm Keith and Myrtle bought a home in Greenfield. They spent 14 winters in Arizona where they had many friends.

She was preceded in death by her parents and two brothers, Marvin and Loren McNeley.

To order memorial trees or send flowers to the family in memory of Myrtle Kinyon , please visit our flower store.