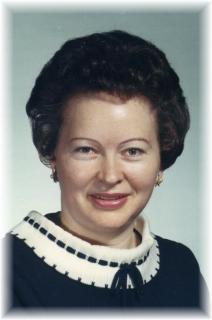 Funeral Services: Will be held on Saturday, November 9, 2013, at 10:30 a.m. at the Zion Lutheran Church in Dexter with burial in the Immanuel Lutheran Cemetery in Adair. Pastor Jeffrey Keuning will officiate the service.

Visitation: Will be held on Friday, November 8th, at the Steen Funeral Home in Greenfield from 2:00 p.m. to 7:00 p.m. with the family greeting friends from 5 to 7 p.m.

Memorials: To the Nadine Nielsen memorial fund to be established by the family at a later date.

Lavera Nadine Nielsen was born December 23, 1932, in Guthrie County, Iowa, the daughter of Wayne Harold and Blanch May (Cowden) Benton. She passed away on Monday, November 4, 2013, at the Panora Nursing and Rehab Center in Panora at the age of 80.

Nadine graduated from Greenfield High School with the class of 1951. She was baptized and confirmed on December 19, 1954, at the Trinity Lutheran Church in Des Moines. On March 6, 1956, she was united in marriage to Fred Nielsen in the Immanuel Lutheran Church in Adair. They lived all of their married life south of Menlo on their farm.

Nadine worked in the insurance world in Des Moines for five years. She accepted the position as secretary at Menlo School and worked there for forty years, retiring in 1996. She enjoyed cooking, flowers and collecting antiques.

Nadine and Fred spent every Christmas Eve with the Stephenson family as long as Fred was able. They had a close relationship with nephew Alan Stephenson who they thought of like a son.

She is survived by her brother, Ronald Benton (Charlotte) of Cumberland; sisters-in-law, Marilyn Stephenson of Adair and Ardith Benton of Greenfield; nieces; nephews; other relatives and friends.

To order memorial trees or send flowers to the family in memory of Nadine Nielsen , please visit our flower store.
Send a Sympathy Card