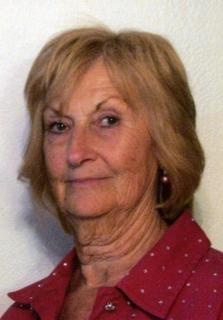 Memories and Lunch: Will be held on Sunday, October 29th, from 1:00 p.m. to 4:00 p.m. with Memories at 2:30 p.m. at the St. John’s Catholic Church in Greenfield. Private family burial will be in the St. Patrick’s Catholic Cemetery in Massena.

Memorials: Memorials may be directed to the Nancy Waters memorial fund to be established by the family at a later date.

Nancy Carol (Davis) Waters passed away at the Hospice House in Creston on October 26, 2017.

Nancy was born July 13, 1940, to Wayne and Daisy (Strompp) Davis at their home in rural Adams County.

She grew up on the family farm just outside of Bridgewater with her brother Denny. She attended Bridgewater HS, where she was a member of the basketball team, graduating in 1958. After HS Nancy started working in Des Moines then moved to Atlantic, where she met the love of her life Jerry.

Nancy was a stay at home Mom until her children went to school. She helped Jerry with the bookwork at the Mill and the hog buying station. She drove the school bus for C&M for around 15 years, happily effecting hundreds of kids lives with her infectious smile and caring way. Later in life she worked for the Nodaway Valley School District in varying capacities, prior to retiring.

She was an active member of St John’s Catholic Church in Greenfield. She loved gardening, her grandkids, and travelling. Patti Morrison and Deedee Amdor where her favorite adventure partners. In later life, she enjoyed the companionship of Ron Smith.

She enjoyed carrying on Grandma D’s traditions of making her famous chocolate cake and caramels. She enjoyed watching her grandkids show animals at the fair, play in the school band, sing, and followed all of them to their sport activities of which she attended numerous events.

To order memorial trees or send flowers to the family in memory of Nancy Waters , please visit our flower store.