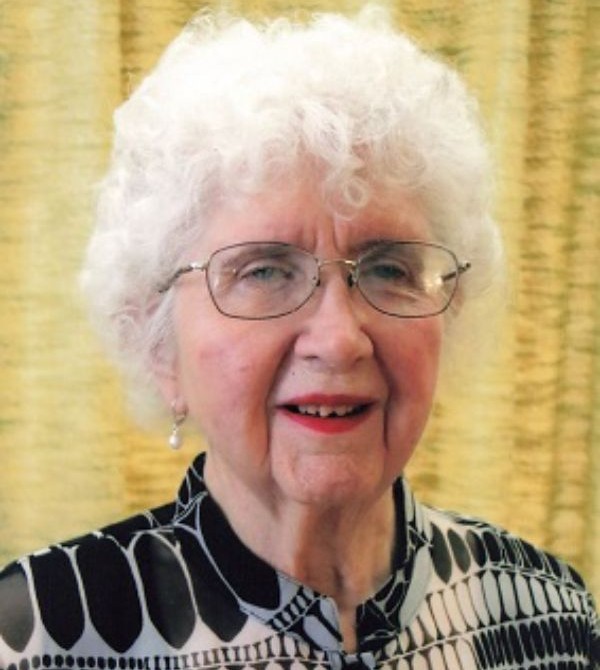 Celebration of Life Services:  Will be held on Thursday, April 14, 2022, at 10:30 a.m. at the Greenfield United Methodist Church with burial following in the Greenfield Cemetery.  Pastor Melinda Stonebraker will officiate the service.  The Lamb Funeral Home in Greenfield is in charge of the professional arrangements.

Memorials:  May be directed to the Vada Martin Memorial Fund to be established by the family at a later date.

Nevada Daphne Martin was born to Ronald T. and Daphne (Marriott) Pugh on October 3, 1932 in Des Moines, Iowa, and passed away from complications of pneumonia on April 8, 2022 at the Adair County Memorial Hospital in Greenfield.
Vada spent most of her childhood in Des Moines, but also lived for a period of time in a house halfway between Eldon and Tuscumbia, Missouri, near the Lake of the Ozarks.  After graduating from East High School in Des Moines, she worked at Central Life Insurance Company in Des Moines, and attended Grand View College, where she graduated in June, 1954.
One night in 1953 in a crowded Tromar Ballroom in Des Moines, Vada and the group she was with were seated at a table with some visitors from Greenfield, and she struck up a conversation with one young man, Bill Martin.     After that evening, a quick exchange of letters led to a date the next weekend, and on August 12, 1954, they were married in a small ceremony at Union Park Methodist Church in Des Moines.  They honeymooned in a cabin near Lake of the Ozarks.
The young couple settled in Greenfield, where Vada worked as a second-grade teacher, and Bill continued working at the REC.  In October, 1956, they welcomed a son, Ronald Ord, named after his two grandfathers, and in 1959, they welcomed another son, Jeffrey Scott.  Later, Vada enrolled at Drake University, where she received her Bachelors of Science degree in 1969 and Approval #81 for Special Education in 1970.  Following her graduation, she became a special education teacher in Greenfield, and after the special education program was relocated to Creston, she continued teaching there.
Vada and Bill were members of the Greenfield United Methodist Church.  Outside of work, they enjoyed square dancing for many years, and Vada was a member of the Order of the Eastern Star and Bill a member of the Masonic Temple.  Vada served as Worthy Matron of the Greenfield Eastern Star in 1962, and also served nine years as an officer.
Vada was proud to be a member of the Greenfield TOPS club, and achieved KOPS (Keep Off Pounds Sensibly) in 2004.  She greatly enjoyed the weekly meetings with the Greenfield TOPS club.
Vada and Bill enjoyed travelling, including a trip to Thailand to visit her brother who had retired there, with a stop in Japan, where Bill had been stationed after World War II as a part of GHQ.  They also enjoyed three cruises, in the Caribbean and to Alaska.
Vada was preceded in death by her parents, Ronald and Daphne Pugh; her parents-in-law Ord and Elsie Martin; her half-brother Don A. Carlisle; and her oldest son, Ronald Martin.
She is survived by her husband of 67 years, Billie Ord Martin, of Greenfield; son Jeff Martin, of Fujiyoshida, Yamanashi, Japan; sister-in-law Bernice Keller of Seattle;  brother-in-law John Galbraith of Sun City, Arizona; cousins and other relatives; and many friends.

To order memorial trees or send flowers to the family in memory of Vada Martin, 89, of Greenfield, please visit our flower store.
Send a Sympathy Card

Private family burial will follow the service at the Greenfield Cemetery.