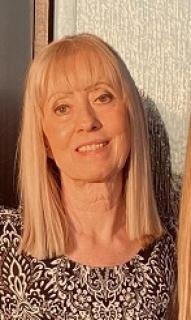 Family Visitation: The family will greet friends one hour prior to services on Thursday at the Steen Funeral Home in Greenfield.

Memorials: Memorials may be directed to Nickala Jo Nelson Memorial Fund to be established by the family at a later date.

Nickala Jo (Piper) Nelson went home to be with her Lord and Savior Jesus Christ on August 5, 2021 at the Unity Point Hospice Taylor House in Des Moines, Iowa at the age of 69. Nicki was born on May 12, 1952. She was the daughter of Robert Lee Piper and Phyllis Jean (Donnellan) Piper in Greenfield, Iowa.

Nickala (Nicki) lived in Greenfield, Iowa; Albany, Oregon; and Bellevue, Washington where she graduated from Newport High School in 1970. She attended Grace College in Winona Lake, Indiana from 1970 to 1972. In 1991, Nicki went back to school at Marshalltown Community College, where she earned her Nursing degree in 1994. Nicki worked at the Iowa Veterans Home in Marshalltown, Iowa for 24 years as a Registered Nurse and a Nurse Clinician. She retired from nursing in December of 2014.

Nicki had two twin children, Kai Joseph Kouba and Moriah Lynn Kouba, who were raised on a farm in Tama County, Iowa. In the fall of 2002, Nicki met Dale Nelson and they were married on November 17, 2006. Nicki and Dale built two houses during their marriage in the country by Rhodes, Iowa.

Nicki enjoyed reading her Bible, being with family and friends, holiday celebrations, being outdoors, gardening, walking, decorating, and riding Harley motorcycles with her husband Dale. Dale and Nicki took many Harley trips to the Northwest United States and Canada with their motorcycle friends. Nicki also enjoyed shopping with her mother Phyllis, her sister Tami, and her daughter Moriah.

We will profoundly miss our wife, sister, mother, and grandmother until we see her again in Heaven.

The family of Nicki wish to express their gratitude for all acts of kindness shown to them in their time of sorrow, and invite you to share in a luncheon at the Methodist Church in Greenfield following the Committal Service at the Greenfield Cemetery.

To order memorial trees or send flowers to the family in memory of Nickala Nelson , please visit our flower store.