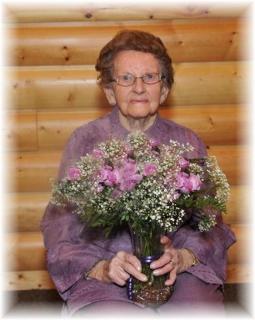 Nina Mikkelsen passed away on Monday, April 16, 2012, at the Corning Nursing and Rehab in Corning, Iowa.

Celebration of Life Services: Friday, April 20, 2012, at 11:00 a.m. at the United Methodist Church in Orient. Burial will follow in the Rose Hill Cemetery, Nevinville, Iowa. Pastor Cathing Nutting will officiate the service.

Nina Blanche (Winn) Mikkelsen was born at home in Adams County, one of twelve children to Ed and Carrie (Smith) Winn, on February 12, 1914. She died Monday, April 16, 2012 at the Corning Nursing and Rehab Center in Corning, Iowa at the age of 98.

Nina attended school in Orient and Nevinville and graduated from Creston High School. She worked as a Nanny in New York for a period of time after graduation. On June 11, 1937, Nina was united in marriage to Thomas Mikkelsen, in North Boro, Iowa. To this union five children were born: Carol ,Thomas , Jerry, Rick and Joni. Nina and Tom owned and operated a gas station/cafe in Creston after they married. They later bought a farm south of Nevinville where they raised their family.

Nina was a member of the Orient United Methodist Church. She was a past member of the XYZ Club, a longtime member of the Williamson Auxiliary and a member of the Nevinville Quilting Group. She was an avid gardener, never being able to walk by a weed! She canned and preserved everything from elderberry jelly to pickled beets. She loved all fourteen of her grandchildren and was a role model of hard work for them. She loved the farm and enjoyed riding around the area looking at the crops.

To order memorial trees or send flowers to the family in memory of Nina Mikkelsen , please visit our flower store.
Send a Sympathy Card