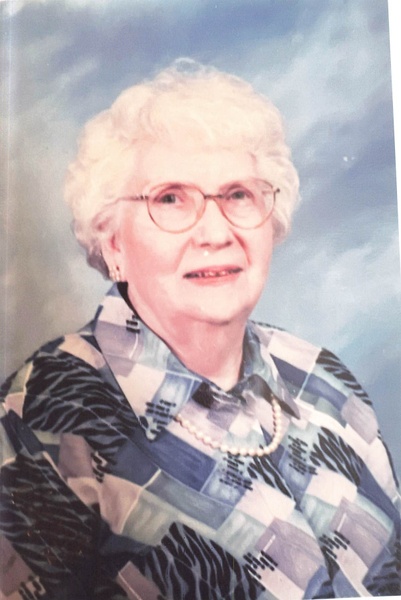 Celebration of Life Services: Will be held on Wednesday, July 6, 2022, at 10:30 a.m. at the United Methodist Church in Greenfield with burial in the Greenfield Cemetery.  A luncheon will immediately follow the burial at the church.  Pastor Steven Broers will officiate the service.  The Lamb Funeral Home in Greenfield is in charge of the professional arrangements.

Memorials:  To the Norma Donnellan Memorial Fund to be established by the family at a later date.

Norma Louise Donnellan was born August 27, 1924, in Seymour Iowa, the daughter of Carl Johnson and Una (Merritt) Johnson. She passed away on Monday June, 27, 2022 at the Greenfield Rehabilitation and Nursing Center at the age of 97.

Norma grew up in Seymour Iowa and graduated from high school there. After graduation the family moved to Greenfield where Norma met Robert (Bert) J. Donnellan. After they dated for a short time Bert enlisted in the Army during WWII. In 1943 he was stationed on Staten Island NY and about to be shipped out to France. He wrote a letter to Norma’s father, Carl, asking for her hand in marriage. So on June 1, 1943, at the age of 18 she took a train to Staten Island alone. Bert was 6 hours late due to military red tape and had to leave Norma sitting by herself in Grand Central Station! He finally showed up and they were married the same day in a civil ceremony.  To this union 3 children were born: Robert (Little Bert), Maureen, and Colleen. In the early 60’s Norma was one of the founding members of The Association for Retarded Citizens or ARC of Iowa as it was later named. Norma then went to work for Matura Action Corp. Her title was General Relief Director, and in this capacity she started the Adair Co. Neighborhood center which assisted low income families in applying for aid and various other needs. Planned Parenthood of Iowa hired Norma in 1972 to open 3 more satellite clinics in southwest Iowa.

Norma loved her family and babysat for her grandchildren and great grandchildren whenever she could. She loved to play Bridge with her special friends in their Bridge club. Later Norma attended her stitching club once a week.  She enjoyed quilting a new baby blanket for each great grandchild that came along!

Norma was preceded in death by her husband, Bert, her daughter Maureen, her son Robert and a grandson, James. Out of 5 siblings only one remains, a sister Eleanor Bricker of Kansas City.  She is survived by one child, Colleen Williams (Tom) of Des Moines, 5 grandchildren, 18 great grandchildren, and one great-great grandchild.

To order memorial trees or send flowers to the family in memory of Norma Donnellan, 97, of Greenfield, please visit our flower store.