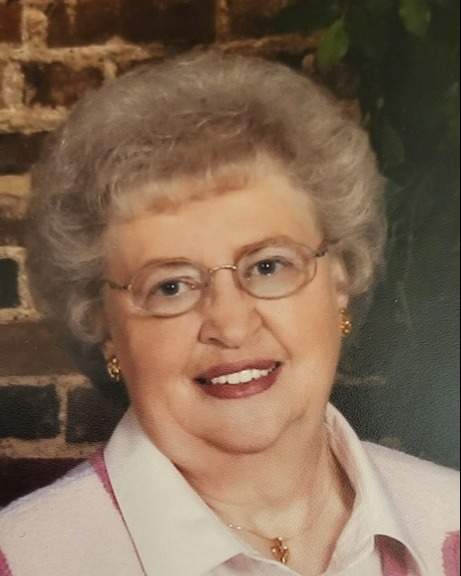 Memorials:  In lieu of flowers, memorials in Norma’s honor should go to St. Patrick’s Church in Massena, the Massena Historical Society or the Friends of the Library.

Norma Elizabeth Henkenius Schaaf, daughter of Herman and Anna Nees Henkenius, was born in Arcadia, Iowa on April 22, 1931. When Norma was eight years old, her family moved to a farm one mile south of Massena. Norma graduated from Massena High School with the class of 1949. After graduation, she worked at the office of Dr. C.L. Henkel for three months and then moved to Atlantic and was employed at the ASC Office. On September 26, 1953, Norma and Lyle W. Schaaf of Atlantic were married at St. Patrick’s Church in Massena. They began farming south of Anita. Norma continued to work in Atlantic until March of 1955. To this union four children were born; Colleen, Karen, Steven and Kevin. The family moved in February 1960 to the Henkenius family farm south of Massena. Lyle was killed in a farm accident on August 14, 1967. Norma and the children moved to Massena in February 1968, purchasing the family home at 306 East Cedar St. in February 1970. Norma served as Massena’s city clerk from March 1968 until 1982. During this time, she also worked at the Massena Livestock Auction and with the Massena High School lunch program. Norma was employed at the Cass County Assessor’s office for 18 years until retiring in 1995. After retirement, Norma continued her love for writing and history, compiling memory books for her children and grandchildren and gathering family history. She co-authored “The Birthing Kitchen” and put together a book about her husband Lyle’s life as well as a book about her life. For Massena’s 125th year anniversary, she compiled the book “At Home in Massena” that documented all of the families that lived in each of the houses in Massena. Norma was a member of St. Patrick’s Catholic Church since 1939, St. Patrick’s Altar and Rosary Society, Massena Historical Society and Friends of the Library. She served as correspondent for the Massena News from 1998 until 2007. She loved Massena and playing basketball for Massena High. Norma also loved spending time with her family, friends and grandchildren, any music by Elvis, auctions and estate sales and never passed a garage sale that didn’t call her name. If you needed any information about Massena or wanted to know the latest gossip, she was your go to person. Norma was preceded in death by her parents, husband Lyle, brothers Kenneth and Don Henkenius, sisters Ethel Fritz and Irene Klahn, son Steven Schaaf and daughter Colleen Morrison. She is survived by her son Kevin (Susan) of Omaha, daughter Karen Morrison of Massena, son-in-law Pat Morrison of Bartlesville, OK, sisters-in-law Norma Lee Schaaf of Anita and Jean Henkenius of Atlantic, eight grandchildren and eleven great grandchildren.

To order memorial trees or send flowers to the family in memory of Norma E. Schaaf, 91, of Massena, please visit our flower store.

Burial will immediately follow the service at the St. Patrick's Catholic Cemetery in Massena with a luncheon following the burial at the church.