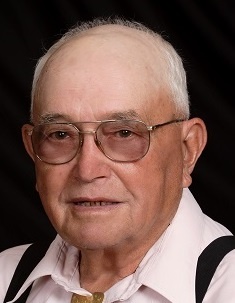 Funeral Services: Will be held on Wednesday, May 11, 2022, at 10:30 a.m. at the Greenfield United Methodist Church with burial following in the Greenfield Cemetery with full military graveside rites will be conducted by the Greenfield American Legion Head-Endres Post No. 265 and V.F.W. Post No. 5357.  A luncheon will be held at the church following the committal services.  Pastor Melinda Stonebraker will officiate the service.  The Lamb Funeral Home in Greenfield is in charge of the professional arrangements.

Memorials:  To the Norman Parrott Memorial Fund to be established by the family at a later date.

Norman Lyle Parrott was born to Alfred Levi Parrott and Elisa Wilhemina Christina (Wahe) Parrott on July 4, 1927, in Cass County, Iowa.  He was united in marriage to Betty Lou Buckner on December 21, 1946, at Avondale Church.

Norman graduated 8th grade but was not allowed to go to high school by his father.  Norman worked on the home farm, and then spent several years working for various farmers in the Bridgewater area.  He and Betty bought their farm outside of Greenfield, but left to spend two years in the Army in Augusta, Georgia, after the army lowered standards and took him with eyesight in only 1 eye.  While in the army, he was top of his class in radio repair/communications and chose to stay on base as an instructor instead of going overseas.  They returned to Iowa 1954 with daughter Norma, and started farming again.  The family grew with son George and daughter Karen.  Norman enjoyed hunting and fishing and was a good steward of the land.  He was always a good neighbor to all those around him, always willing to help others and could fix or build anything.  Many nephews and nieces got a chance to experience farm life helping on the farm, or visiting.     In 1979, daughter Karen and husband Alvin joined the farming venture.   Working together all those years allowed Norman and Betty to continue farming and stay in their home on the farm into their 90’s.

Norman was a long-time member of the Hebron Church, and very active thru 1975.  He enjoyed being active in the Barzona Cattle Breeders Association, the Adair County Coon Hunter Assn, Green Hills Hay Association and the Adair County Sheriff’s Posse, as well as other groups.

He is survived by daughters Norma Nielson of Eugene, Oregon, and Karen (Alvin) Havens of Greenfield, grandchildren Mathew Havens, Alecia (Matt) Heinz, Katey Havens and Eric G. Nielson, great grandchildren Lilah, Caleb and Gaton Heinz, and Sydney and Wyatt Nielson, as well as many nieces and nephews and their families.

To order memorial trees or send flowers to the family in memory of Norman Parrott, 94, of Greenfield, please visit our flower store.

Full military graveside rites will be conducted by the Greenfield American Legion Head-Endres Post No. 247 and V.F.W. Post No. 5357. A luncheon will be held at the church following the committal services at the cemetery.