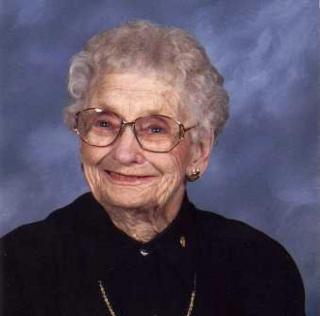 Funeral Services: Monday, November 22, 2010, at 10:30 a.m. at the Greenfield United Methodist Church with burial in the Greenfield Cemetery. A luncheon will follow the burial at the church. Pastor Charles Layton will officiate the service.

Family Visitation: Sunday, November 21st from 3:00 to 5:00 p.m. at the Steen Funeral Home in Greenfield.

Opal Marie Jacobson was born on January 24, 1916, in rural Adair County, Iowa, the daughter of Harley Corbett and Mary Blanche (Porter) Hall. She passed away on Thursday, November 18, 2010, at the Adair County Memorial Hospital, Greenfield, Iowa, at the age of 94 years.

Opal attended grade school in Adair and Union counties. She graduated from Greenfield High School in 1933. On September 1, 1936, Opal married Jacob Leonard Green of Osceola, Iowa, and moved to Orange County, California, in 1937. Two children were born to this union, Gary Leonard Green on May 27, 1940, and Nancy Ann Green on August 27, 1942. They moved back to Osceola in 1944. Shortly thereafter, Leonard was drafted to the Army in 1944 and was killed in action in World War II on January 31, 1945. After his death, Opal and her children returned to Greenfield in 1946.

Opal worked at Yount Wallpaper and Murdy/Mather Drug Store until retiring in 1981. Opal and Jake spent many of their winters in Mesa, Arizona, after retirement. Jake passed away on February 24, 1999, shortly after the couple had celebrated their 50th wedding anniversary.

Opal was a very active member of the United Methodist Church and a 50-year member of both the U.M.W. and the American Legion Auxiliary. She was also a member of other various organizations in the Greenfield community.

Opal's children, grandchildren, and great grandchildren were very special to her. She absolutely loved spending time with her family. Opal enjoyed playing cards, listening to music, and dancing. She also enjoyed watching all sports, but especially basketball, golf, and baseball.

Her family and friends will miss her giggle, her easy going way, her faith, her conversations, her welcoming spirit, her beef and noodles, her dark chocolates, her clever sayings, her history lessons, her love of the St. Louis Cardinals, her sharp memory, and that wonderful sense of humor.

She was preceded in death by her parents; her two husbands; her brothers and their wives Dale and Marie Hall and Gerald and Margaret Hall; one brother-in-law, Cleo Jacobson; and one sister-in-law, Lauretta Frank.

She is survived by her son Gary Green and wife Jo of Leawood, Kansas; daughter Nancy Gross and husband Dennis of Greenfield, Iowa; and son Gaylen "Jake" Jacobson and wife Maureen of Tama, Iowa. She is also survived by seven grandchildren: Teresa Green, Jeff Green, Tammy Green, Greg and Robin Green, Scott and Jackie Gross, Susan and Mike Smith, Paul and Stacey Gross, 13 great grandchildren and many other relatives and friends.

She was not only a wife, mother, grandmother, and sister, she was our best friend and we will all miss her dearly. Grandma Jake loved to live by the motto "It's not the years in your life, it's the life in your years."

To order memorial trees or send flowers to the family in memory of Opal Jacobson , please visit our flower store.
Send a Sympathy Card