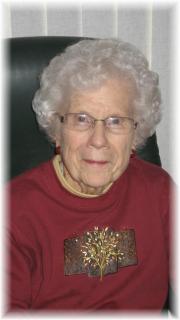 Mass of the Resurrection: Will be held on Thursday, October 24, 2013, at 11:00 a.m. at the St. John’s Catholic Church in Greenfield with burial in the Greenfield Cemetery. Father Ken Gross will officiate the service. A luncheon will follow the burial at the church.

Visitation: Will be held on Wednesday, October 23rd from 2 p.m. to 8 p.m. at the Steen Funeral Home in Greenfield with the family greeting friends from 6 to 8 p.m.

Prayer Service: Will be held on Wednesday at 5:30 p.m. at the Steen Funeral Home in Greenfield.

Memorials: To the Pat Fees memorial fund to be established by the family at a later date.

Patricia Fees passed away peacefully on Sunday, Oct. 20, 2013 at her home surrounded by her loving family. Pat, the daughter of Lawrence and Priscilla (Meuer) Kuhl, was born on Feb. 13, 1923, in Harlan, Iowa. She grew up in Corning, Iowa, and graduated from high school in 1941. She went on to receive her college degree from Ottumwa Heights College.

On Nov. 10, 1947, she was united in marriage to Hartford Fees. They began their life together in Corning, then moved to Greenfield in 1949 where she lived the rest of her life. Together they were blessed with eleven children: Kathleen, Patty, Bob, Maureen, Mark, Michael, Julie, Barbara, Carol, Jim and Lynn. Her life was devoted to her family and her faith. Through the years she enjoyed attending her children and grandchildren's many sports and school activities, playing golf, gardening, bridge club, reading, watching golf, football and basketball. She was happiest when her home was filled with her family and friends. She was an active member of St. John's Catholic Church.

From July 2011 to September 2013, the Greenfield Manor and Assisted Living became her new home. Her wonderful caregivers there and from Care Initiative Hospice were an important part of her life and became a second family to her. On September 24, 2013, she was blessed to return to her home, enjoying the remaining weeks of her life with her family caring for her. The beautiful fall weather enabled her to enjoy many hours of 'porch time' and the ability to enjoy her flowers.

To order memorial trees or send flowers to the family in memory of Pat Fees , please visit our flower store.
Send a Sympathy Card