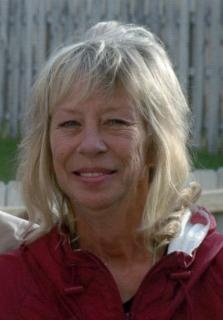 Visitation: Will be held on Tuesday, September 29th from 2 p.m. to 8 p.m. at the Steen Funeral Home in Greenfield.

Family Visitation: The family will greet friends on Tuesday evening at the Steen Funeral Home in Greenfield from 6 to 8 p.m.

Memorials: In lieu of flowers memorials may be directed to the family to be decided at a later date.

Patricia Ann Anderson was born August 2, 1946, the daughter of James and Florence (Stangl) Anderson. She passed away on Friday, September 25, 2015, at the Iowa Methodist Medical Center in Des Moines, Iowa, at the age of 69.

Pat was born and raised in Atlantic, Iowa. In her childhood she delivered the Atlantic News Telegraph, did laundry at Cardio Hotel, carhopped at A&W Root Beer and did various babysitting. She graduated from Atlantic High School. On August 7, 1965, she was united in marriage to Darwin Anderson in Atlantic, Iowa. To this union three sons were born: Doug, Chris and Joe.

They moved to Greenfield in 1972. Pat worked at Equitable Life Insurance, Mercy Hospital, Iowa Conservation Commission, FDIC and the Adair County Memorial Hospital. Pat was a breast cancer survivor and had 20 years of never missing the bi-weekly payroll to ensure every employee was paid accurately and was a Cub Scout leader. She loved spending time with her six grandchildren, making sure her boys were well fed on opening day of pheasant hunting, Memorial Day family picnics at Sunnyside Park and enjoyed going to the casino with family and friends.

She is survived by her three sons, Doug Anderson and wife Janet of Redfield, Chris Anderson and wife Kristie of Adel and Joe Anderson and wife Amber of Ankeny; six grandchildren, Brad, Rachel, Olivia, Chase, Oliver and Ingrid; sisters, Cathy Ackerman of Atlantic and Susie Benshoof of Boone; sister-in-law, DeLaine Erickson of Cumberland; brother-in-law, Danny Anderson of Glenwood; other relatives and friends.

To order memorial trees or send flowers to the family in memory of Patricia Anderson , please visit our flower store.
Send a Sympathy Card