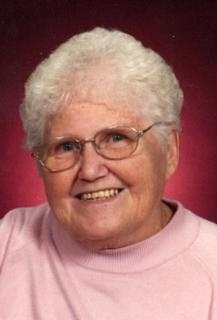 Mass of Christian Burial: Will be held on Wednesday, March 15, 2017, at 10:30 a.m. at the St. John’s Catholic Church in Greenfield with burial in the Greenfield Cemetery. A luncheon will be held at the church following the committal services at the cemetery. Father James Ahenkora will officiate the service.

Family Visitation: The family will greet friends on Tuesday evening from 5:00 p.m. to 7:00 p.m. at the Steen Funeral Home in Greenfield.

Prayer Service: Will be held on Tuesday at 5:00 p.m. at the Steen Funeral Home in Greenfield.

Memorials: Memorials may be directed to the Pat Schaefer memorial fund to be established by the family at a later date.

Patricia Ann Schaefer was born September 13, 1933, the daughter of Wendeline Vincent and Helen Irene (May) Miller in Creston, Iowa. She passed away on Friday, March 10, 2017, at the Greenfield Rehabilitation and Health Care Center in Greenfield, Iowa, at the age of 83.

Pat was raised in Creston, attended St. Malachy’s through the 8th grade and then attended Creston High School. On October 29, 1949, she was united in marriage to Earl Schaefer at the St. John’s Catholic Church in Greenfield, Iowa. To this union five children were born: Margaret, Joseph, Michael Paul, Richard and Philip.

Pat was a member of the St. John’s Catholic Church and the Sunshine Club in her neighborhood. She enjoyed volunteering at church functions, the blood drive in Orient, sewing and embroidery work. She also enjoyed cooking, working in her garden and canning with family. Her passions were decorating wedding, birthday and graduation cakes, making specialized quilts for family and friends and sewing Barbie doll clothes for her granddaughters.

To order memorial trees or send flowers to the family in memory of Patricia Schaefer , please visit our flower store.
Send a Sympathy Card