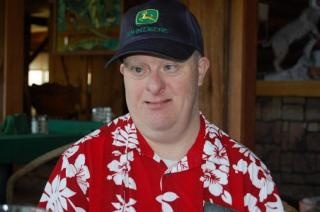 Family Visitation: The family will greet friends on Thursday, August 3rd, from 6:00 p.m. to 8:00 p.m. at the Steen Funeral Home in Massena.

Prayer Service: A Prayer service will be held at the Steen Funeral Home in Massena on Thursday evening at 6:00 p.m.

Memorials: Memorials may be made to the Pat Cullen memorial fund to be established by the family at a later date.

Patrick Michael Cullen was born July 13, 1958, the son of Ambrose and Lorraine (Cotter) Cullen in Council Bluffs, Iowa. He passed away on Tuesday, August 1, 2017, at the Greater Regional Hospice Home in Creston, Iowa, at the age of 59.

Pat grew up on the family farm south of Cumberland and moved into Cumberland in 1994. He lived in Cumberland until 2009, when he entered C.A.R.E. in Afton, Iowa. He enjoyed collecting pop tabs for Ronald McDonald House, helping friends and neighbors and was an avid Iowa Hawkeye fan.

To order memorial trees or send flowers to the family in memory of Pat Cullen , please visit our flower store.