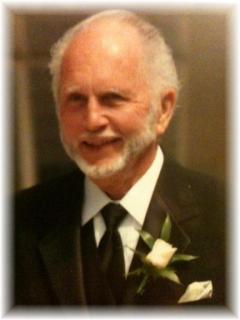 Graveside services: Will be held on Saturday, October 19th at 11am - Greenfield Cemetery.

Peter F. Hughes III was finally freed from Earthly illness and pains on July 16, 2013 as he was welcomed home by our Father and able to rejoin his wife after five long years apart. Pete was born on June 4th, 1932 in Pueblo, Colorado to Peter and Alice Hughes.

In 1952, Pete entered the United States Army as a Private first class, completing infantry school at Ft. Benning, Georgia. The following year, he was an Infantry Officer Candidate, completing his service with a final rank of 2nd Lieutenant in Ft. Carson, Colorado and an honorable discharge in 1955. Pete formed life long friendships with the men he served, trained and grew with. This was a time he treasured as long as he lived.

Pete graduated from Colorado University and completed a Masters degree from Pepperdine University.

Pete met and married longtime Greenfield native, Nancy (Weller) Hughes in 1959. They welcomed a son, Peter IV, in 1960 and a daughter, Allyson, in 1967. The family lived for a time in Colorado, moving to and settling in California in 1962.

Pete worked for General Telephone and Lockheed. He was active in Lion's Club and his children's sports and activities. He developed a great proficiency of the internet in his early seventies and went about finding his former OCS (Officer Candidate School) buddies, one by one. Not only did he succeed in locating them all, he also helped organize a reunion which quickly became an annual event and it continues to this day. One of his proudest moments was hosting this event in Claremont, CA with his wife in 2008.

To order memorial trees or send flowers to the family in memory of Peter Hughes , please visit our flower store.
Send a Sympathy Card