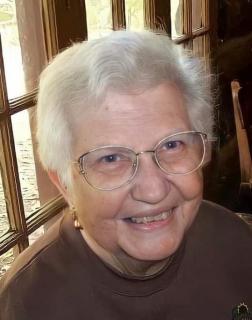 Services: A Celebration of Life Service and Luncheon will be held on Saturday, September 11, 2021, at 11:00 a.m. at the Greenfield United Methodist Church. Burial will be in the Greenfield Cemetery at a later date. Mr. Neil Hoadley will speak at the service.  The Steen Funeral Home in Greenfield is in charge of the professional arrangements.

Phyllis Eileen Everling was born on May 24, 1936, to Mary Christine (Huffman) and Sherman Eugene Everling in Adams County, Iowa. She passed away on Saturday, August 7, 2021, at the Good Samaritan Society in Fontanelle, Iowa, at the age of 85.

Phyllis spent her early years in the Adams and Adair County areas and later the family moved to a farm north of Greenfield. On August 24, 1957 Phyllis Eileen Everling Lewis was united in marriage to Kenneth Edward Hoadley. The couple made their home in Greenfield and raised four sons: Neil, Ricky, Curtis, and Kent.

While raising their boys, Phyllis and Kenneth played different roles, they both loved the boys, but Kenneth was definitely the disciplinarian, while Phyllis was their nurturer and cheerleader and sometimes accomplice. Phyllis found pride and a positive note in everything they did. Oh the stories she could tell! It didn’t matter if it was the story about the broken antique glass basket that someone had so expertly sat back together on the shelf. Phyllis was pretty sure a super ball was involved. It might have been the shooting range that was set up in the basement with her catalogs and magazines, Phyllis said at least they were safe about it and not doing it in the yard. Phyllis was extremely proud of their beautiful pictures and art projects, because the boys got their talent from her. Then there was the time a peace officer delivered one of them home for being a bit too ornery in town. Phyllis was just glad he wasn’t in jail. On another occasion, there was a streaker who may or may not have been one of her sons. Phyllis was sure he was expressing right to freedom. Phyllis loved music, but she did get tired of Rick’s drums! She also loved going for drives with her sister, documentaries, watching sports, visiting with friends and relatives, bird watching, playing games on her iPad, and onion rings!

Anyone who had the privilege to know Phyllis knows that she did everything to perfection. Phyllis was a graduate of Greenfield High school and after she raised her boys she took courses at Southwestern Community College. Phyllis did not stop at college courses. She was always seeing things that interested her, and she would find ways to educate herself and perfect new skills. Phyllis learned to decorate cakes. They weren’t just cakes. They were works of art and tasted as good as they looked. She later passed this skill on to her granddaughters. Phyllis taught herself about photography. She photographed many weddings and family occasions. Phyllis would often photograph events for others who could not afford to pay a professional. If someone in the family was in need of a costume for anything from Halloween to class plays or church programs, she was definitely the go to person. She had skills in sewing, knitting, crocheting, needlepoint, embroidery, and quilting. Phyllis loved to plant flowers and landscape her yard. She often incorporated ceramics and other things she had created into her flowerbeds. She was an avid vegetable gardener as well. Phyllis spent hours teaching her grandchildren to preserve vegetables and make jelly. Phyllis had a great passion for history. She became an expert genealogist and traced her family’s history back for many generations. Phyllis loved helping other people find out more about their genealogical pasts as well.

Besides all the other things Phyllis accomplished, she was also employed at a few favorite places outside of the home. The jobs she enjoyed most were working in the cafeteria at Greenfield School, as a dispatcher at the Adair County Sheriff's Office and volunteer work. Phyllis was also an in-home daycare provider off and on. She cared for many local families and family members. She was known as Grandma Phyllis to all “her kids”.

Phyllis continued her love for learning by donating her body to Des Moines University to be studied in the medical department.

To order memorial trees or send flowers to the family in memory of Phyllis Hoadley , please visit our flower store.
Send a Sympathy Card