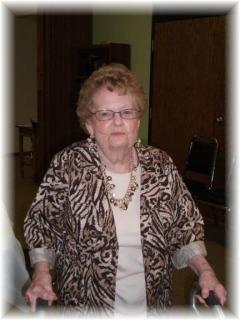 Funeral Services: Will be held on Monday, March 3, 2014, 11:00 a.m. at the Emmanuel Lutheran Church in Fontanelle with burial in the Fontanelle Cemetery. Pastor Steven Broers will officiate the service. A luncheon will be held at the church following the burial.

Family Visitation: The family will greet friends on Sunday from 2:00 p.m. to 4:00 p.m. at the Emmanuel Lutheran Church in Fontanelle.

Memorials: In lieu of flowers memorials are to be directed to the Emmanuel Lutheran Church or to the Good Samaritan Society.

Phyllis Loraine Edwards Rohner was born February 21, 1926 to Glenn and Elinore (Welcher) Edwards in Fontanelle, IA. She was the oldest of 12 children. She passed away on Thursday February 27, 2014 at the Good Samaritan Home in Fontanelle, IA where she had been since June of 2013.

Phyllis attended the Fontanelle Public Schools where she met her husband Ivan F. Rohner in the percussion section of the band. They were married for 65 years. To this union were born five children: Bette Ann, Craig Ivan, Dennis Kirk, Randy Dean and Michael Todd. They lived in Fontanelle for several years where Phyllis was a homemaker, Cub Scout leader and babysitter. She was a member of Emmanuel Lutheran Church and served as treasurer of the First Lutheran Church in Fonda, IA. In 1969 the family moved to Jefferson, IA where Ivan had taken a new job. In 1972 they moved to Fonda, IA where Phyllis worked along side Ivan at the Rohner's Meats and Processing business for 15 years. Following their retirement from the locker, Phyllis and Ivan remained in Fonda for several years but decided in 2002 to return to Fontanelle so they could be closer to family.

Phyllis enjoyed entertaining and a lot of her time was the planning and preparation of food and getting her home spotless. In the family, she was known for her delicious pies and always wanting to get the family together for different events. Phyllis loved her home and had a real knack for making them look “homey”. She took great delight in decorating them both in and out for the different seasons. She was an avid IA State Cyclone fan as well as a political junkie. She considered herself a champion croquet player. She took great pleasure in her flowers and took pride in having a beautiful yard. She had an obsession for knick knacks, shoes and jewelry. She enjoyed playing cards, games, singing, and dancing.

Phyllis was a delightful person to be around and was always interested in every person she met. She loved her family and enjoyed spending time with them and her friends.

To order memorial trees or send flowers to the family in memory of Phyllis Rohner , please visit our flower store.