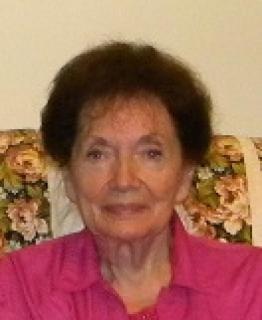 Funeral Services: Will be held on Monday, December 12, 2016, at 10:30 a.m. at the United Methodist Church in Greenfield with burial at the Greenfield Cemetery. A luncheon will be held following the committal services at the church.

Open Visitation: Friends may call at the Steen Funeral Home in Greenfield on Sunday from 12:00 p.m. to 5:00 p.m.

Family Visitation: The family will greet friends on Sunday afternoon from 3:00 p.m. to 5:00 p.m. at the Steen Funeral Home in Greenfield.

Memorials: Memorials may be directed to the Raideen Martin memorial fund to be established by the family at a later date.

Raideen Lois Martin was born July 5, 1932, the daughter of Edward Carl and Eva Matilda (Jensen) Fredrick in Union County, Iowa. She passed away on Wednesday, December 7, 2016, at the Greater Regional Hospice Home in Creston, Iowa, at the age of 84.

Raideen attended school in Greenfield and Orient and went on to receive her LPN at Southwestern Community College in Creston. On April 8, 1950, she was united in marriage to Leon Martin in the United Methodist Church in Greenfield. To this union four children were born: Jerry, Steve, Lori and Mike. Raideen worked as a charge nurse at the West Bridge Care Center in Winterset for 34 years and also had worked for Dr. Joseph Baker in Greenfield. She enjoyed reading, baking, birdwatching, pets, visiting casino, attending church, bowling and square dancing. She especially enjoyed spending time with her grand children and great grand children.

The family of Raideen wishes to express their gratitude for all acts of kindness shown to them in their time of sorrow and invites you to join them for a luncheon at the church following the committal services at the cemetery.

To order memorial trees or send flowers to the family in memory of Raideen Martin , please visit our flower store.