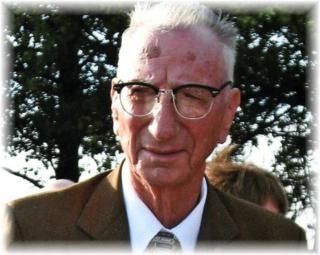 Funeral Services: Thursday, March 15, 2012 at 10:00 a.m. at the Steen Funeral Home in Greenfield with burial at the Greenfield Cemetery. A luncheon will be held at the Orient United Methodist Church following services at the cemetery.

Memorials: To the Orient United Methodist Church or the Care Initiatives Hospice in Greenfield.

Ralph went to schools in Cass County and graduated from Anita High School in 1940. On November 2, 1940 he was united in marriage to Doris D. Watkins in Atlantic, Iowa. To this union three children were born: Leonard, Linda and Carolyn.

Ralph and Doris moved to the farm southwest of Orient in 1943 where he lived until November 2011. He resided at Crest Haven Care Centre thereafter.

Ralph enjoyed farming, hunting and trapping. He was a master carpenter and built and remodeled several homes in the surrounding area. He was active in 4-H as a leader. He raised pure bred angus cattle and took pride in his herd. He enjoyed coin collecting, antique tools and sharing fruits of their garden with neighbors.

He was preceded in death by his wife, Doris D. Lett in 2010; his parents, Arthur and Grace Lett; four brothers, Robert, Kenneth, Howard and Art; and three sisters, Mable Hayter, Ethel Sheets and Darlene Smith.

To order memorial trees or send flowers to the family in memory of Ralph Lett , please visit our flower store.