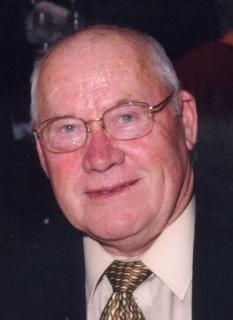 Celebration of Life Services: Will be held on Saturday, October 1, 2016, at 10:30 a.m. at the Immanuel Lutheran Church. Flag presentation will be conducted by the Greenfield American Legion Head-Endres Post No. 265 and V.F.W. Post No. 5357 immediately following the service at the church. Rev. Dr. Keith Schweitzer will officiate the service. The Steen Funeral Home in Greenfield is in charge of the professional arrangements.

Family Visitation: The family will greet friends on Friday evening from 5:00 p.m. to 7:00 p.m. at the Immanuel Lutheran Church in Greenfield.

Memorials: Memorials to the Ralph Mitchell memorial fund to be determined by the family.

Ralph Samuel Mitchell son of Samuel H Mitchell and Bertha (Jensen) Mitchell was born on October 9, 1932 at his parent’s home in rural Bridgewater IA and went to his heavenly home on September 24 at Creston, IA at the age of 83. He was baptized and confirmed at the Congregational Church in Fontanelle, IA, later joining Emmanuel Lutheran Church in Fontanelle and was a member of Immanuel Lutheran Church in Greenfield at the time of his death.

He attended the rural schools in Adair County and graduated from Fontanelle High School in 1951. After graduation he farmed for two years with his father before serving our country during the Korean Conflict with the VII Army Corps, spending most of his service in Stuttgart, Germany. He received his honorable discharge in 1955.

He loved the life of a farmer and returned to that profession until his retirement in 1997, spending a short time on a farm northwest of Fontanelle and 37 years on a farm at the north edge of Greenfield.

Ralph married Irma Jean Langguth on July 17, 1955 at the Lutheran Church in Fontanelle. Their daughter, Kim and two sons, Jeffry and Gregory brought joy to their lives and their family circle now includes a son-in-law, two daughters-in-law, six grandchildren and six great grandchildren. Ralph and Irma Jean have made their home on the north edge of Greenfield for over 56 years.

He thoroughly enjoyed watching his children and later his grandchildren compete in sporting events and after his retirement took up golfing. He read voraciously and was a frequent visitor to the area libraries. He made friends easily and had a sharp wit. He was always willing to lend a helping hand where needed. After his retirement he loved to spend time helping at Pratt Vineyards in CA. Ralph and Irma Jean also did a lot of traveling, having visited Europe, Hawaii, Alaska and other places of interest in the U.S.

To order memorial trees or send flowers to the family in memory of Ralph Mitchell , please visit our flower store.