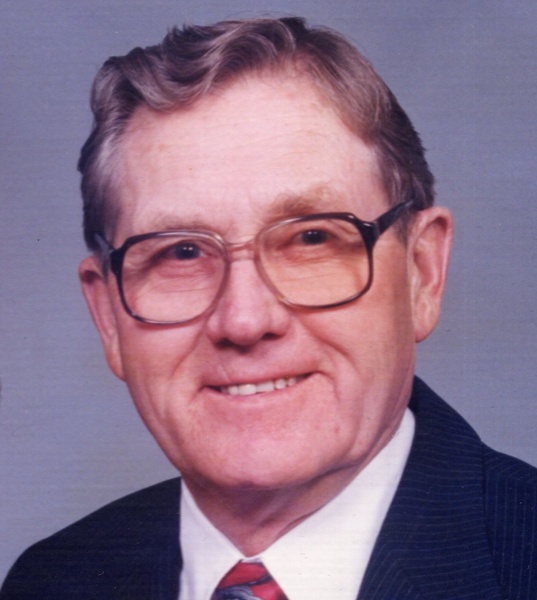 Funeral Services:  Will be held on Saturday, April 2, 2022, at the Emmanuel Lutheran Church in Fontanelle, Iowa, at 1:30 p.m. with burial in the Fontanelle Cemetery. A luncheon will be held at the church following the burial.  Pastor Steven Broers will officiate the service.  The Lamb Funeral Home in Fontanelle is in charge of the professional arrangements.  Online condolences may be left to the family at to be www.lambfuneralhomes.com.

Memorials:  May be directed to the Fontanelle Fire Department or the Emmanuel Lutheran Church.

Ramon Dean Jacobson was born on August 7, 1929 in Fontanelle to Fred and Verva Jacobson.  Brothers Max and Leo followed in 1930 and 1932.  He was raised in the Highland Methodist church where his mother played the piano.  In December 1944, at the age of 15, his mother passed away after a lengthy illness and he went to live with the Roy Jensen family in Fontanelle until his high school graduation in 1947.
His first job out of high school was working for Art Baudler doing electrical wiring.  He worked briefly in Omaha at Omar Bakery.
On January 29, 1950, he was united in Marriage to Marilyn Kriens in the Congregational Church in Fontanelle.
They began their married life in Omaha before moving back to Fontanelle to care for Marilyn’s ailing parents.  He took a job at the Coop as a feed salesman and truck driver before purchasing a farm north of town in 1953.
To this union, six children were born:  Clark, Michael, Beverly, Brad, Brian and Jan. Son, Michael, died in a tragic farm accident in October 1963 at the age of 10.
In August 1963, he accepted a job to become the General Manager of the Fontanelle Coop where he worked until he became the General Manager at the Lacona Central Coop in Lacona, IA in February of 1975.  He retired in 1991 and they returned to their home in Fontanelle.
Ramon was a member of the Emmanuel Lutheran Church where he served on the church vestry.  He served as a Cub Scout Master and was a member of the Adair County Flying club.  After retirement he served as mayor of Fontanelle for several terms, worked for Young Mechanical and tore down many old barns or farm buildings constructing new smaller buildings for sale.
He was preceded in death by his parents, his wife Marilyn, son Michael, two brothers Max and Leo, sisters-in-law Mildred and Phyllis, and nephews Stanley, Ronald and Roger.
He is survived by his children and grandchildren, Clark Jacobson and wife Mardi of Overland Park, Kansas, Jill Jacobson of San Diego and Luke Jacobson, and great granddaughters Gemma and Juliette (Jette) of San Diego, Bev Everitt and daughter Alex of West Des Moines, Brad Jacobson of West Des Moines, daughter Kayleigh and her husband Josh Ohnemus of Des Moines, Brian Jacobson, wife Amanda and daughter Lindsey of Grimes, Iowa and Jan Hook and husband Tork of Adel, Iowa, daughters, Torrie of Chicago, Brennan of West Des Moines and Jordan of Adel, step-sister Joyce Mulhern of Waukee and many nieces, nephews and friends.

To order memorial trees or send flowers to the family in memory of Ramon Jacobson, 92, of Fontanelle, please visit our flower store.

A luncheon will be held at the church following the burial.