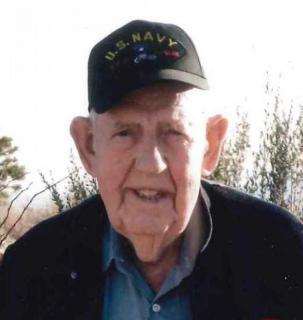 Graveside Services: Will be held on Wednesday, September 16, 2015, at 10:00 a.m. at the First Evangelical Lutheran Church Cemetery, rural Wiota, Iowa. Full military graveside rites will be conducted by the Anita American Legion Post No. 210. Pastor Ted Weishaupt will officiate the graveside service. A luncheon will be held at the First Evangelical Lutheran Church following the graveside service. The Steen Funeral Home in Massena is in charge of the professional arrangements.

Memorials: In lieu of flowers, memorial contributions may be made to Bethlehem Lutheran Church - Next Door Project, 2100 Wadsworth Blvd, Lakewood, CO 80214.

Raymond William Voss passed away September 4, 2015, in Colorado.  He was born June 8, 1922 in Cass County, Iowa, the son of John and Johanna (Hoffrogge) Voss. He was the oldest of five children; Ella, Irene, Dorothy and Elmer.

He was baptized and confirmed at First Evangelical Lutheran Church in Wiota, IA. During WWII he served in the Navy as a gunner and powderman. After his Honorable Discharge, he returned to farming north of Massena and married Yvonne Laartz in June 1946. In December 1961, he moved his family to Denver, Colorado.

After retiring from Gas Equipment Company, he and his wife enjoyed traveling with the Evergreen Saddle Club and Camper's Club, spending winters in southern Texas and above all --spending time with family.

To order memorial trees or send flowers to the family in memory of Raymond Voss , please visit our flower store.
Send a Sympathy Card