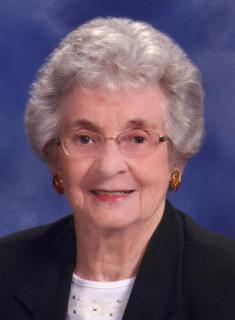 Mass of Christian Burial: Will be held on Friday, July 29, 2016, at 10:30 a.m. at the St. John’s Catholic Church in Greenfield with burial in the Greenfield Cemetery. Father Mike McLaughlin will officiate the service. A luncheon will follow the burial at the church.

Open Visitation: Will be held on Thursday, July 28th from 2 p.m. to 8 p.m. at the St. John’s Catholic Church in Greenfield.

Family Visitation: The family will greet friends on Thursday evening at the St. John’s Catholic Church in Greenfield from 6 to 8 p.m.

Memorials: To the Regina Yount Memorial Fund to be established at a later date by the family.

Margaret Regina Yount was born June 26, 1927 to Michael and Gertrude (O’Brien) McManus on the family farm in Ringgold County, Iowa. She passed away on July 26, 2016 at the Good Samaritan Society in Fontanelle, Iowa at the age of 89.

Regina grew up on a farm north of Diagonal on the High & Dry. She attended country schools and graduated as class valedictorian from Cromwell High School in 1944. She and her sister, Mary Ann, worked at the Omaha stock yards. She then went on to work at the bank in Kent, Iowa, where she formed a lifelong friendship with Celia and Earl McIntire.

Regina was united in marriage to Dale R. Yount on June 6, 1949 in Diagonal, Iowa. They were blessed with two daughters, Mary Ann and Patricia Mae, and celebrated 55 years of marriage. After beginning their married years in Osceola, they made their home in Greenfield in 1953. They owned and operated paint, wallpaper and decorating stores in Osceola, Greenfield, Atlantic, and Des Moines for over 50 years. She thoroughly enjoyed interacting and assisting people with their projects and getting to know others while building lasting friendships.

Regina was a very proud supporter of her community and showed this through her active involvement in Business Women, Chamber of Commerce, Girl Scouts, St. John’s Catholic Church, Hospital Auxiliary, and many other groups and activities. She enjoyed spending time with family, especially attending her grandchildren’s activities, morning coffee chats, crafting projects and trips. She was always on the go and there for anyone in need. She was very proud of her Irish heritage and considered herself fortunate to visit Ireland with Dale. She wore her heart on her shoulder, had positive words for all, and loved whole- heartedly.

She was preceded in death by her husband Dale Yount, her parents Michael and Gertrude (O’Brien) McManus, her sister Mary Ann Henrich, her brother Leo “Red” McManus, her sons-in-law, Alan Larson and Guy Powell and her great granddaughter, Norah Glade.

To order memorial trees or send flowers to the family in memory of Regina Yount , please visit our flower store.
Send a Sympathy Card