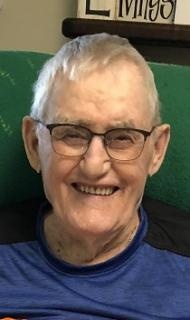 Funeral Services: Will be held on Saturday, August 31, 2019, at 11:00 a.m. at the Fontanelle United Methodist Church with burial in the Winterset Cemetery. A luncheon will be held at the church immediately following the service. Pastor Jodi Rushing will officiate the service.

Open Visitation: Friends may call at the Fontanelle United Methodist Church on Friday, August 30th, from 3:00 p.m. to 8:00 p.m.

Family Visitation: The family will greet friends on Friday evening from 6:00 p.m. to 8:00 p.m. at the Fontanelle United Methodist Church.

Memorials: Memorials may be directed to the Rex Livingston memorial fund to be established by the family.

Rex Dean Livingston, the second child of Clarence Elwood and Blanch May (Ham) Livingston was born September 3, 1928, on a farm northeast of Lorimor, Iowa. He passed away in Greenfield, Iowa on Tuesday, August 27, 2019, one week before his 91st birthday.

When he was three, the family moved to a farm in Madison County near a country store called Podunk Center. In 1941, his parents bought a farm in Adair County about two miles from Hebron, Iowa. He graduated from 8th grade at Grand River No. 7 in 1942. Greenfield didn’t have any school buses yet, so he and his brother Jack met the Zion bus at Hebron and rode to the Zion School. Because of the war, a lot of the young men were in service and high school boys took over school bus driving duties. After he got his license in September, he drove the bus the rest of his junior and senior years, graduating from Zion consolidated School in 1946. He was offered a letter of recommendation by his superintendent to attend college, but chose to farm with his dad and Jack instead.

Rex was drafted into the Marines in December of 1951 and worked as a heavy equipment mechanic. They lived in North Carolina while he was in the service. After his discharge, they rented and lived on four different farms before buying their own farm in 1970. Also in 1970, Rex began driving the bus for the Bridgewater-Fontanelle Schools and did so for the next 34 years. He said he never met a bad kid, just one that needed some love and attention.

In 1999, Rex retired from farming and they moved to Fontanelle where he enjoyed gardening, mowing his lawn and woodworking.

To order memorial trees or send flowers to the family in memory of Rex Livingston , please visit our flower store.