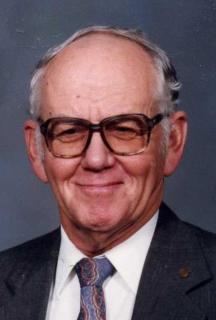 Funeral Services: Tuesday, February 15, 2011, at 1:30 p.m. at the First Presbyterian Church in Greenfield with burial in the Greenfield Cemetery.  Full Military graveside rites will be conducted by the Greenfield American Legion Head-Endres Post No. 65 and VFW Post No. 5357.

Richard "Dick" Calvin Lundy was born April 6, 1936, to William Calvin and Dorothy (Meisenheimer) Lundy in Adair County, Iowa. He passed away on Thursday, February 10, 2011, at the Good Samaritan Society in Fontanelle at the age of 74.

Dick attended rural school in the county and graduated from Greenfield High School in 1954. He joined the Army and served his country from April 7, 1959 to January 27, 1961. After returning from service he farmed for as long as his health permitted. He lived with his parents on farms in Adair County, moved to Greenfield with them and for the past four years had made his home at the Good Samaritan Society in Fontanelle.

Dick was a very active member of the First Presbyterian Church in Greenfield, the Optimist Club and the Adair County Farm Bureau. He also was a member of the Cumberland Rose Players and enjoyed performing in many plays and presentations. He attended many sport events and loved visiting with family and friends.

He was preceded in death by his parents; brother, Gene Lundy; two sisters, Shirley Henss and Mary Elizabeth Johnson; and brother-in-law, Richard Johnson.

He is survived by his brother-in-law, Kenneth Henss of Des Moines; nieces; nephews; cousins, Eldon and Alice Lundy his special caretakers; many other cousins, relatives and friends.

To order memorial trees or send flowers to the family in memory of Richard Lundy , please visit our flower store.
Send a Sympathy Card