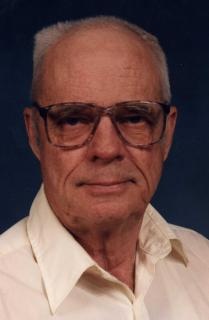 Funeral Services: Wednesday, February 16, 2011, at 1:30 p.m. at the Steen Funeral Home in Fontanelle with burial in the Fontanelle Cemetery with full military graveside rites by Fontanelle American Legion Carlson Post No. 247. Pastor Steven Broers will officiate the service. A luncheon will follow the burial at the Emmanuel Lutheran Church in Fontanelle.

Family Visitation: Tuesday evening from 6:00 p.m. to 8:00 p.m. at the Steen Funeral Home in Fontanelle.

Memorials: To the Richard Edsall Memorial Fund to be established by the family at a later date in care of the Steen Funeral Home, P.O. Box 390, Greenfield, Iowa 50849.

Richard Norman Edsall was born September 5, 1925, in Adair County, Iowa, the son of Ross Laverne and Esther Margaret (Wood) Edsall. He passed away on Saturday, February 12, 2011, at the Greenfield Manor in Greenfield, Iowa, at the age of 85.

Richard was raised and grew up around Fontanelle, Iowa. He graduated from Fontanelle High School in 1943. On April 14, 1947, he was united in marriage to Edna Wessel in Guthrie Center, Iowa. To this union two sons were born: Loren and Lyle. They farmed all their married life west of Fontanelle.

Richard was a member of the American Legion and VFW and served his country in the U.S. Army Air Force during World War II. He enjoyed listening to country music, driving around in the country, raising his cattle, and especially spending time with his grandchildren and great grandchildren, enjoyed eating out, and in August 2010 he received a plaque for Century Farm award from State of Iowa.

He was preceded in death by his parents; and wife, Edna Edsall in 2010.

To order memorial trees or send flowers to the family in memory of Richard Edsall , please visit our flower store.