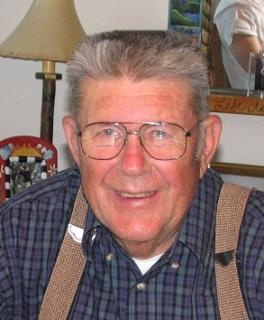 Celebration of Life Services: Will be held on Monday, February 26, 2018, at 2:00 p.m. at the United Methodist Church in Greenfield with burial in the Greenfield Cemetery with full military graveside rites by the Greenfield American Legion Head-Endres Post No. 265 and V.F.W. No. 5357. Refreshments and fellowship will be held at the church following the committal services at the cemetery. Pastor Eric Schubert will officiate the service.

Family Visitation: The family will greet friends on Monday one hour prior to services at the church.

Memorials: Memorials may be directed to the Dick Gross memorial fund to be established by the family at a later date.

Richard A. “Dick” Gross was born December 4, 1934 in rural Adair County, Iowa to Arthur L. and Elva M. Kembery Gross. Growing up he attended country school and worked on the farm. Dick passed away at Greenfield Rehabilitation & Health Care Center on February 21, 2018.

Dick served his country from October 1954 to October 1956 as a member of the 82nd Airborne at Fort Bragg, NC. Following military service he moved to Dallas, TX and lived with his special Uncle and Aunt, Delbert and Avis Kembery Clayton. While there he attended American Barber College. Later Dick would become closely identified with both wearing and skillfully cutting the flat-top hairstyle. Uncle Delbert was a commercial airline pilot and encouraged Dick to take flying lessons. He was ready to solo but it was discovered that his instructor was not certified.

Dick married Nancy Newton on June 23, 1957 at the Emmanuel Lutheran Church in Fontanelle. This union almost didn’t happen because Nancy was none too impressed by how fast Dick drove. Dick began his barbering career and they became parents to daughters Lynne and Sandra. He supplemented the family income by working for Wayne Ray repairing appliances and televisions, helping Glen Petersen on his farm, and operating the projector at the Grand Theatre. Cardinal IG came to Greenfield in 1973 and Dick was one of the first employees hired. He headed the maintenance department, retiring in 2000.

Dick was a problem solver and welcomed any challenge presented. He was always willing to drop everything to help family and friends. Dick and Nancy built their home on West Iowa street in 1962. Half of the basement developed into Dick’s well-equipped workshop where he spent most evenings, and the other half was finished into a space for Lynne and Sandy to entertain friends. He built an igloo for the girls one snowy winter and kept it intact for several weeks by icing it down with the garden hose daily. When the ice was thick he would outfit his truck with ropes and drive around “the pond” on Grandma and Grandpa Newton’s farm pulling the girls and their friends on ice skates and sleds. Nick, the family dachshund, spent 18 years as Dick’s companion. Dick and Sandy took Nick fishing at Nodaway Lake where Nick crossed paths with a muskrat. The muskrat got the better of Nick, so Dick took him home and sewed him up on his workbench. Dick taught Lynne and Sandy to drive on the rock road to the old city dump, with Nick riding proudly on the hood. Most Sunday’s you could find Dick and Nancy hosting Sunday dinner for the girls and their families. Dick was Grandpa to three grandchildren, Matthew, Marc and Michelle. They all loved going to the airport to fly, and sometimes crash, Grandpa’s model planes. He instilled in them his love of fishing at “the pond”. He taught them to drive before they had a permit; driving lessons often included instructions to “floor it!”, how to safely drive in mud or snow, put chains on the tires when required, and how to properly check the engine oil.

Later in life, for a birthday gift his family gave him the King Schools private pilot instructional videos and manuals. Under the tutelage of Ron Havens and Gary Maas he became a licensed pilot. He gave countless airplane rides to friends and family and thoroughly enjoyed flying. Dick loved playing pranks and practical jokes, largely at the expense of his dear friend, Ray Leto. In 1991 Dick and Nancy purchased the 160-acre farm in Grove Township from Nancy’s parents. Dick spent countless hours there planting trees, mowing, improving “the pond” and gardening with Ray. “The pond” was the place to be on the 4th of July, and many other holidays and birthdays were celebrated there. His other hobbies included fishing, hunting, building and flying model airplanes, and vacationing with his family, especially at Lake of the Ozarks.

We extend our sincere thanks and appreciation to the staffs at Hearts in Home Care, Greenfield Rehabilitation & Health Care Center, Kindred Hospice, and to our friends who helped with Dick’s care.

To order memorial trees or send flowers to the family in memory of Richard Gross , please visit our flower store.