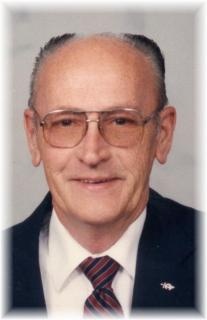 Memorial Services: Will be held on Tuesday, April 15, 2014, at 11:00 a.m. at the Massena United Methodist Church in Massena with a Masonic Service by the Greenfield Crusade Lodge #386 A.F. & A.M. Interment will be in the Massena Center Cemetery. Pastor Laurel Westerkamp will officiate the service. A luncheon will be held at the church following the services at the cemetery.

Memorials: To the Richard Johnson memorial fund to be established by the family at a later date.

Richard “Dick” Don Johnson was born August 11, 1931, in Richland Township, Adair County, Iowa, the son of William B. and Verma (Herrick) Johnson. He passed away on Friday, April 11, 2014, at the Greenfield Manor in Greenfield, Iowa, at the age of 82.

Dick grew up in Richland Township and graduated from Richland Consolidated School in 1949. On August 16, 1952, he was united in marriage to Marjorie Edwards in the Massena United Methodist Church. To this union two children were born: Mark and Debra. They lived in Massena most of the marriage until 2012 when they moved to Greenfield. Dick had worked for Sulgrove Implement, Massena Implement and then he owned and operated Johnson Sinclair Service in Massena retiring in 2005.

Dick loved fishing, traveling, dancing, visiting with friends and family, was a ham radio operator, and enjoyed “tinkering” with antique tractors and cars. He was a member of the Massena United Methodist Church, Massena Chamber of Commerce, Massena Lion’s Club, Massena Fire Department and Za-Ga-Zig Shrine.

He is survived by his wife Marjorie Johnson of Greenfield; son, Mark Johnson of Massena; daughter, Debra Stoulil and husband Larry of Newton; one grandson, Austin Stoulil; sisters and brothers-in-law, Barb and Bob Queck of Orient, Bev and Marco Festa of North Carolina and Donna Edwards of Lincoln, Nebraska; aunt by marriage, Ada Goshorn; other relatives and friends.

To order memorial trees or send flowers to the family in memory of Richard Johnson , please visit our flower store.