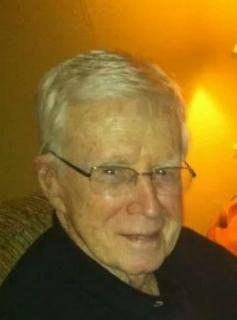 Mass of Christian Burial: Will be held on Saturday, May 26, 2018, at 10:00 a.m. at the St. John’s Catholic Church in Greenfield with burial in the Greenfield Cemetery. A luncheon will be held at the church following the committal services at the cemetery. Father James Ahenkora will officiate the service.

Memorials: In lieu of flowers the family asks that all memorials be directed to the St. John’s Catholic Church.

Richard “Dick” Kuhl, lifelong resident of Greenfield, Iowa passed away quietly on March 29, 2018 at Grand Brook Memory Care in Grapevine Texas. He was born on November 6, 1926 in Harlan Iowa and was preceded in death by his wife of 59 years, Kathryn McElroy Kuhl, his parents Lawrence and Priscilla Kuhl, his brother Robert Kuhl and his sister Patricia Kuhl Fees.

He is survived by his sister Helen Kuhl Bryson of Afton Iowa, two children Ann Kuhl Northcott of Euless Texas and James Kuhl of Bemidji Minn., several grandchildren, many nieces and nephews and one great-grandchild.

Dick grew up in Corning Iowa where his parents owned and operated the theater there. He married Kathryn McElroy in 1950 ultimately moving to Greenfield Iowa in 1954 to manage the Grand Theater which he purchased and remodeled in 1965. He ultimately sold the theater in 1994 but continued his love of movies until his death.

He loved golf and was a life long member of the Greenfield Country Club. In addition, Dick served 2 separate terms as Adair County Supervisor and was very involved in St. John’s Catholic Church in Greenfield.

To order memorial trees or send flowers to the family in memory of Richard Kuhl , please visit our flower store.
Send a Sympathy Card