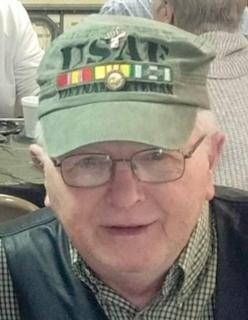 Funeral Services: Will be held on Wednesday, July 10, 2019, at 10:00 a.m. at the Immanuel Lutheran Church in Greenfield with burial in the Greenfield Cemetery with full military graveside rites by the Greenfield American Legion Head-Endres Post No. 265 and V.F.W. Post No. 5357. y. A luncheon will be held at the church following the committal service at the cemetery. The Rev. Dr. Keith Schweitzer will officiate the service.

Memorials: In honor of Richard Schaecher to the Iowa Veterans Cemetery.

Rick Schaecher was born on June 5, 1942, in Omaha, Nebraska, the son of John J Schaecher Sr. and Helen (Bell) Schaecher. He passed away on Tuesday, July 2, 2019, at the Adair County Memorial Hospital in Greenfield, Iowa, at the age of 77.

Rick Schaecher grew up in Omaha, Nebraska. In 1959 he joined the Air Force, serving four years and nine months. He was stationed in the Philippines with temporary duty in Viet Nam. He earned several medals and served his country proudly.

In 1963 Rick married Edith (Edie) Buhlmann in Omaha Nebraska. To that union, a daughter Robin & son Ronald were born. Rick worked several jobs in Omaha and joined Royal Brass & Hose as a salesman in 1983 until retirement in 2007. He took great pride in his salesmanship and made many friends out in the field.

In 1977 Rick, Edie, and the family moved to Greenfield and have been residing there since. In 1993 Ron, Danielle, & Lindsay came to live with Rick & Edie allowing Rick to share many happy years with the girls building lots of beautiful memories.

He served as an elder at Immanuel Lutheran Church, a member of the American Legion, Sunday School teacher, youth leader at church, and was on the Greenfield City Council for four years.

His greatest pleasure was serving as Director of Veterans Affairs and serving the veterans of Adair County. He served in this role from 2012 until retiring Jan 1, 2019.

He is also survived by his twin brother Robert "Bob" Schaecher & Donna of Omaha, sisters-in-law Shirley Schaecher of San Antonio and Alyce Combs of Plattsmouth NE, seven nieces & nephews and many cousins and friends.

To order memorial trees or send flowers to the family in memory of Richard Schaecher , please visit our flower store.