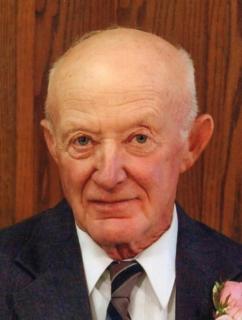 Mass of Christian Burial: Will be held on Tuesday, July 17, 2018, at 1:00 p.m. at the St. John’s Catholic Church in Greenfield. Burial will be in the Greenfield Cemetery with full military graveside rites by the Greenfield American Legion Head-Endres Post No. 265 and V.F.W. No. 5357. A luncheon will be held at the church following the committal services at the cemetery. Father James Ahenkora will officiate the service.

Memorials: May be directed to the St. John’s Catholic Church or to a memorial bench at the Adair County Fairgrounds to honor his love of visiting.

Richard George Welsch was born January 1, 1933 on a farm southwest of Fontanelle, IA in Adair County, the son of Raymond Jacob and Margaret Kathryn (Kordick) Welsch. He passed away July 13, 2018 at the Greenfield Rehabilitation and Health Care Center in Greenfield, IA at the age of 85.

Richard attended country school Summerset #8 and then Fontanelle High School where he graduated in 1951. In April of 1953 Richard was drafted into the Army, serving in Korea and Japan from 1953 to 1955. While in Korea, Richard served with the 58th Engineer Float Bridge Company.

Following his military service he was employed as a mechanic at Ehrsam Implement and Schildberg Chevrolet Garage in Greenfield. On June 13, 1959, Richard was united in marriage to Mary Alice Scanlan at St. Joseph’s Catholic Church in Villisca, IA. They began their married life living in Greenfield and then in the fall of 1961 Richard and Mary moved to a farm located 5 miles southwest of Greenfield. Richard continued to work in Greenfield for a few more years before becoming a full-time farmer. In his spare time, he also enjoyed restoring old cars and tractors, especially Oliver tractors and antique Ford automobiles. He also looked forward to attending the annual Early Wheels of Iowa Swap Meet. His wife Mary always seemed to think he would end up bringing more home than he took. He also treasured spending time with his children and grandchildren. The grandchildren all enjoyed going fishing, playing around the farm, and visiting the “treasure house” up the road with Grandpa. They would always find a great “treasure” to take home with them much to the chagrin of their parents. He lived a life deeply rooted in his Catholic faith. His favorite saying was “Everything Always Works Out in the End.” He never met a stranger and loved spending time visiting with others and oh how he loved to laugh.

Richard was a devoted member of St. John’s Catholic Church as well as the Knights of Columbus.

He was preceded in death by his parents, his wife, brother Gary Welsch and sister-in-law Joan Welsch.

To order memorial trees or send flowers to the family in memory of Richard Welsch , please visit our flower store.
Send a Sympathy Card