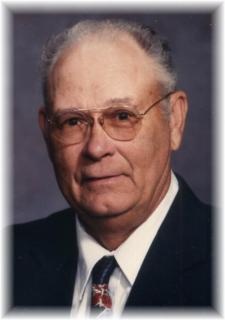 Funeral Services: Will be held on Thursday, January 2, 2014, at 11:00 a.m. at the Emmanuel Lutheran Church in Fontanelle with burial in the Fontanelle Cemetery. Pastor Steven Broers will officiate the service. A luncheon will be held at the church following the burial.

Visitation: Will be held on Wednesday, January 1, 2014, from 3 to 7 p.m. at the Emmanuel Lutheran Church in Fontanelle.

Family Visitation: Will be held on Wednesday, January 1st, at the Emmanuel Lutheran Church in Fontanelle from 5 to 7 p.m.

Memorials: To the Robert Bigelow memorial fund to be established at a later date.

Robert Carl Bigelow joined his heavenly father on December 29, 2013 at home surrounded by his loving family.

Robert (Bob) was born on March 19, 1927 at Strawberry Point, IA to Chester Otis & Verna Gillpatrick Bigelow. Due to hardship & the depression Robert along with a younger sister and 2 younger brothers were placed in the Christian Home Orphanage in Council Bluffs, IA. On January 28, 1941 he came to the Fontanelle area to live as a foster son in the home of Fred and Clara Mangels. He was baptized and confirmed on May 10, 1942 at the Emmanuel Lutheran Church in Fontanelle and remained a faithful member.

On March 28, 1948 Easter Sunday, Robert was united in marriage to Berthie Gross. In 1950 they moved to the present farm place. To this union, 8 children was born – Rose, Twin boys Max and Rex deceased at birth, Lester, Paul, Daisy, Iris and Kirk.

Over the span of his lifetime he loved helping raise their six children showing them his skills on the park playground and roller skating. He enjoyed farming, visiting relatives, traveling, socializing with neighbors, friends, especially grand and great-grand kids. They went south in the winter to spend time with their son Kirk. When he was no longer able to farm he enjoyed mowing yard and his 4 wheeler. He became legendary for his peanut brittle, and suckers. Becoming sedentary and until his passing, he spent many hours bird watching, knitting stocking hats and scarves which he made for family and friends and donated to various charities.

To order memorial trees or send flowers to the family in memory of Robert Bigelow , please visit our flower store.
Send a Sympathy Card