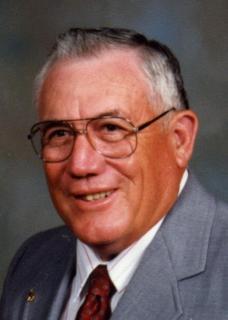 Celebration of Life Services: Will be held on Friday, September 18, 2015, at 10:30 a.m. United Methodist Church in Cumberland with a luncheon and visitation immediately following at the Cumberland Community Building. Pastors Casey Pelzer and David Clark will officiate the service.

Memorials: Memorials may be made to the Robert Blankinship memorial fund to be established by the family.

Robert Bruce Blankinship was born May 20, 1928, in Cumberland, Iowa, the son of Floyd and Leta (Bolt) Blankinship. He passed away on Wednesday, September 9, 2015, at the Cass County Memorial Hospital in Atlantic, Iowa, at the age of 87.

Robert graduated from Cumberland High School in 1946. On July 2, 1948, he was united in marriage to Marilyn Carter. To this union four children were born: Christine, Wes, Leta and Bobbi Lynn.

Bob worked as a farmer, auctioneer, barber, sales representative, and ten years as a Cass County Supervisor. Bob spent many special times with his wife, children, grandchildren and great grandchildren. He enjoyed his church, card games, fishing trips, driving the countryside, politics and RV and bus trips. He and Marilyn visited all 50 states. Bob was active in many local and community organizations. He was a life time member of the Christian Church.

To order memorial trees or send flowers to the family in memory of Robert Blankinship , please visit our flower store.
Send a Sympathy Card