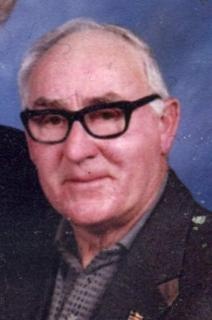 Funeral Services: Will be held on Wednesday, January 3, 2018, at 10:00 a.m. at the United Methodist Church in Greenfield with burial at the Greenfield Cemetery with full military graveside rites conducted by the Greenfield American Legion Head-Endres Post No. 265 and V.F.W. Post No. 5357. A luncheon will be held at the church following the committal services at the cemetery. Pastor Eric Schubert will officiate the service.

Family Visitation: The family will greet friends on Tuesday evening from 6:00 to 8:00 p.m. at the Steen Funeral Home in Greenfield.

Memorials: To the Bob Grasty memorial fund to be established by the family at a later date.

Robert William Grasty was born June 22, 1929, the son of Edward Lee and Eva (Jones) Grasty in Madison County, Iowa. He passed away on Tuesday, December 26, 2017, at the Mercy Medical Center in Des Moines, Iowa, at the age of 88.

When Robert “Bob” was 2 years old his father passed away from cancer. When he was 7 years old, his mother married Elmer Phillips and he and his mother moved to Elmer’s farm in Grand River Township in Adair County, Iowa. After graduation from Grand River No. 2 his step father handed him his packed suitcase and told him “this farm isn’t big enough for both of us”. He had a job lined up with a neighboring farmer. Bob worked out that summer but when fall came he got a job with Robinson Dairy and he could go to high school. He graduated from Greenfield High School in 1947. The next day he joined the Navy Air Corp. He spent most of his time at a test station and he had to have so much time in the air. He was discharged in 1950.

Bob started farming in 1950 and married Loretta Stever on February 3, 1952. In 1958, their only son, David Lee was born. They farmed near Orient for 2 years, moved to east of Greenfield and farmed for over 40 years. They then moved to Greenfield and Bob worked for 21 years as a crop hail adjuster and also was an elected Adair County supervisor for 10 years.

Bob was always willing to help a friend or neighbor in need. He was also a kind and loving husband, father, grandfather and he will be missed very much.

He was preceded in death by his parents; granddaughter, Monica; sister, Wanda Hawker; nephew, Danny Hawker; and brother-in-law, Jerry Hawker.

To order memorial trees or send flowers to the family in memory of Robert Grasty , please visit our flower store.