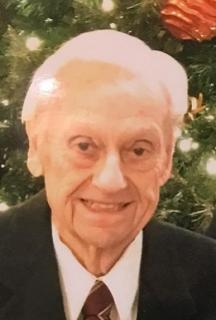 Funeral Services: Will be held on Monday, May 20, 2019, at 1:30 p.m. at the United Methodist Church in Greenfield with burial at the Greenfield Cemetery. A luncheon will be held at the church following the services at the cemetery. Pastor Eric Schubert will officiate the service.

Memorials: To the Robert Kirlin memorial fund to be established by the family at a later date.

On September 14, 1932, Bob became an older brother to Norma Jean. Bob was a life-long member of the United Methodist Church in Greenfield.

Bob completed his education all within the Greenfield Public School System. He worked after school and all his spare time for his father at Kirlin Auto Co.

Bob married Norma Louis Harris on November 4, 1950, at the United Methodist Church in Greenfield. Norma was, also, a graduate from Greenfield High School. They started their family with the birth of son Roger on November 27, 1953, and their daughter Lynne on June 15, 1959.

After Bob and Norma were married, he continued working full time at Kirlin Auto Co. until 1962, when he purchased the business from his retiring father. In 1963, he expanded the business by adding Chrysler, Plymouth and Dodge Trucks to the dealership. In 1965, Bob won a trip to Madrid,Spain for outstanding sales with Chrysler Plymouth; in 1966, he won a trip to Puerto Vallarta, Mexico. He went on to become the third largest volume dealer in the state of Iowa for Chrysler Plymouth in 1967. Bob was one the first Automobile Dealers in the United States to be named into the Chrysler PenaStar Awards Program for both sales and service. Bob’s success in the automobile industry won him many more awards. Bob and Norma closed their business in 2002.

Bob and Norma lived in Greenfield until 2003, when they moved to Indianola, Iowa, to be closer to their daughter and her family, helping take care of their grandson, Michael. Bob, also, worked for Champion Motors in Indianola as a sales person until 2009, when he retired. In 2015, Bob moved into Roger and Renee’s home in Colorado where he resided until May 8, 2019. He lived at the Greenfield Rehabilitation and Health Care Center until he passed on May 13, 2019.

Bob and Norma enjoyed spending time with family, friends and their dogs. Bob enjoyed cars, boating, water skiing, bowling, playing cards, snowmobiling, music, snow skiing, his dogs, watching Westerns, partying with his friends, having his “sippy” at night and working hard. He especially loved being with his grandchildren and great-grandchildren and traveling to Colorado.

Bob was preceded in death by his parents, L.A. and Mary Kirlin and his loving wife Norma.

To order memorial trees or send flowers to the family in memory of Robert Kirlin , please visit our flower store.
Send a Sympathy Card