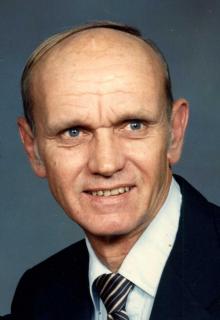 Funeral Services: Tuesday, June 28, 2011, at 11:00 a.m. at the Orient United Methodist Church in Orient with burial in the Orient Cemetery.

Memorials: To the Bob Stoll memorial fund to be established by the family.

Bob graduated from Dexter High School in 1948, as his class president. He served his country in the United States Marines during the Korean War. On November 21, 1954, he was united in marriage to Arlene Zellweger in the Orient United Methodist Church. He farmed in the Orient area and also after moving to Ames. He worked as a carpenter and mason prior to opening up his own plumbing and heating business. They also ran the Mallard Hotel in Ames. After returning to Orient he worked for Burger and Son Plumbing and Heating in Greenfield and the Orient-Macksburg School District until he retired. He spent his remaining years keeping busy gardening, outdoor work, handy work, doing multiple projects, having coffee with friends and watching Bonanza.

He was preceded in death by his parents; wife, Arlene in 1999; and sister, Evelyn.

To order memorial trees or send flowers to the family in memory of Robert Stoll , please visit our flower store.
Send a Sympathy Card