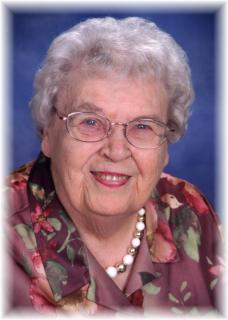 Funeral Services: Will be held at the Greenfield United Methodist Church on Sunday, December 16, 2012, at 2:30 p.m. with burial in the Greenfield Cemetery.

Visitation:  The family will greet friends at the church one hour prior to services on Sunday.

Roberta Mae (Black) Jones was born on October 8, 1918, to Charles Earl and Mabel (Chase) Black at her grandparents farm in Madison County, Iowa. She was born on the day her father landed in France in WWI. It was two months before he learned of her birth and nine months before he came home. Roberta passed away on December 13, 2012, at West Bridge Care and Rehabilitation, Winterset, IA, at the age of 94.

Roberta attended country school in Madison County for her elementary education. She attended one year of high school in Winterset, one year in Dexter. In 1934 the family moved to Greenfield, Iowa, where Roberta completed high school and graduated with the class of 1936.

Roberta always found something to laugh about. She especially enjoyed crocheting and made more than 300 baby sweaters and many afghans for mission projects.

She was preceded in death by her parents, step-mother, Elizabeth Black; her husband Lloyd in 1983; brother, Earl Chase Black, in 1924 and sister, Eva Rachel Foster, in 1996.

To order memorial trees or send flowers to the family in memory of Roberta Jones , please visit our flower store.
Send a Sympathy Card