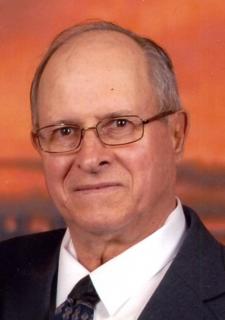 Funeral Services: Will be held on Monday, September 28, 2015, at 11:00 a.m. at the Massena Baptist Church in Massena. Private family burial will take place prior to services. Pastor Bruce Morrow will officiate the service.

Family Visitation: The family will greet friends on Sunday, September 27th from 4 to 6 p.m. at the Steen Funeral Home in Massena.

Memorials: To the Roger Holaday memorial fund to be established by the family at a later date.

Roger William Holaday, son of William Roy and Margaret Elizabeth (Jensen) Holaday was born on July 11, 1937, at the Atlantic Hospital. Roger went to be with Lord on Tuesday, September 22, 2015, at his home in Massena, Iowa, at the age of 78.

Roger grew up on the family farm west of Massena. He attended school through the 8th grade at Crossroads Country School west of his home, where his mother was also his teacher. Roger graduated from Massena High School in 1955. He pitched his team to the State Baseball Tournament. He graduated from Omaha Baptist Bible Institute in 1958. Roger married Betty Maxine Lewis on June 10, 1960, at the First Baptist Church in Ayrshire, Iowa. To this union four children were born: Cynthia, Lynnette, Scott and Bill.

Roger spent his working years in many professions. He did carpentry work with his dad. He began his grave digging career in 1963 and continued until 2010 when his heath forced him to completely turn the business over to his son, Scott. Roger was engaged in farming throughout his adult life. He milked cows, farmed 750 acres with a 4 row planter and a three bottom plow, raised chickens, cattle and hogs. Roger moved to town and continued to farm while working at Johnson Sinclair. At the age of 65, he began his career as a janitor at the Cumberland-Massena Community School, where he worked until his health forced him to retire. In all his endeavors, he modeled Colossians 3:23 - “Whatever you do, work at it with all your heart, as working for the Lord, not for man.”

Roger was an amazing family man. When he finished farm work early, he loaded the family up and went to Cold Springs State Park. When he wanted to have company over, he did the vacuuming. He always thanked Betty for the meal that she had prepared and served. You seldom saw Roger sitting alone. If there was a baby anywhere close by, he was holding him/her. He took care of his parents in their later years. In his leisure time, Roger took his grandchildren fishing or target shooting. He loved the outdoors and hunting, fishing and trapping. Roger collected guns and enjoyed sharing his love of firearms with his family.

To order memorial trees or send flowers to the family in memory of Roger Holaday , please visit our flower store.
Send a Sympathy Card