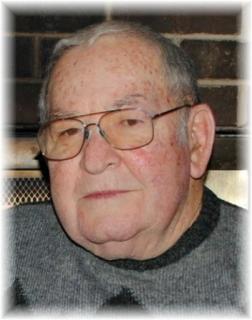 Funeral Services: Will be held on Wednesday, December 24, 2014, at 10:30 a.m. at the United Methodist Church in Greenfield with burial at the Greenfield Cemetery. Full Military Graveside Rites by Greenfield American Legion Head-Endres Post No. 265 and V.F.W. Post No. 5357. A luncheon will be held at the church following the committal services at the cemetery. Pastor Eric Schubert will officiate the service.

Open Visitation: Will be held on Tuesday, December 23rd from 2:00 p.m. to 8:00 p.m. at the Greenfield United Methodist Church.

Family Visitation: The family will greet friends on Tuesday evening from 6:00 to 8:00 p.m. at the Greenfield United Methodist Church.

Memorials: In lieu of flowers memorials may be made to the Greenfield Fire Department, Greenfield United Methodist Church or to the Sports Complex.

Roland “Bud” Neil Ehrsam son of Ernest A. (Pete) and Alice Ruby (Sturdy) Ehrsam born April 16, 1933, Easter Sunday on a farm northeast of Fontanelle, Iowa. An aunt attending the birth called him “Bud” at birth and was better known by Bud all through his life. He passed away on Saturday, December 20, 2014, at the Adair County Memorial Hospital in Greenfield, Iowa, at the age of 81.

Upon graduating Bud worked for his uncle at Ehrsam Implement Company in Greenfield. In June of 1955, he was drafted into the United States Army where he spent most of his service in Granite City, Illinois. While in the service he had many opportunities and learning experiences. The last six months were spent traveling five states inspecting National Guard equipment. On his discharge he returned to Ehrsam Implement until 1972, when he became employed with G&H Motor Freight until their closing in 1988. The next few years were spent doing numerous jobs and in the fall of 1993 he started driving school bus for Nodaway Valley which he enjoyed very much. Over the years Bud had many hobbies: attending auctions, flea markets, and garage sales. He also collected toys, guns, tools and many other small things that struck his attention.

Bud and Eyvonne were friends all through high school and remained so during the years, but in 1961, they became an item and were married on January 28, 1962. They moved to their acreage west of Greenfield in 1976 which they had purchased from the Sturdy family. It remains within the family since 1919.

To order memorial trees or send flowers to the family in memory of Roland Ehrsam , please visit our flower store.
Send a Sympathy Card